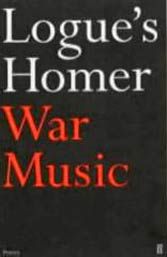 For three decades, the late British poet and writer Christopher Logue (1926-2011) chipped away at “War Music,” his idiosyncratic translation (a rendering, really) of Homer’s “Iliad.” Five installments were published beginning in 1981.

Translators can sulk and swear all they want that Logue knew no Greek, that he takes vast idiomatic liberties. Yet they fail to see the upside, namely the remarkable adding of electricity and hydraulics to an ancient tune by an accomplished modern poet.

Logue burrows into Homer’s violent, macho domain and emerges with an alarmingly beautiful concert of jazzy riffs. Each volume stands on its own, but “All Day Permanent Red,” an account of the early battle scenes between Hector and the opposing Greeks, best elicits the battlefield’s “in flagrante” chaos as seen from a director’s crane, complete with cast instructions. “Slip into the fighting. Into the low-sky site crammed with huge men/Half-naked men, brave, loyal, fit, slab-sided men… Leaping into each other like wolves. … Thumping their chests: ‘I am full of the god!'”

And of the climactic Greek attack: “And here it comes: That unpremeditated joy as you — The Uzi shuddering warm against your hip/Happy danger in a dangerous place.” It is not the misfit Uzi that catches the eye and changes the pace, but the perfect noun-become-verb notion of “happying” danger. Later: “Blood? Blood like a carwash.”

This is most literally war music, an onslaught of armed egos, and Logue’s work is Herculean. The five mostly slim volumes (not all in print, regrettably) are “War Music: an account of Books 1-4 and 16-19 of Homer’s Iliad” (1981), “Kings” (1992), “The Husbands” (1994), “All Day Permanent Red” (2004), and “Cold Calls” (2005). The ensemble is among the greatest little-known poetic accomplishments of a 20th-century rich in poets, poems and riffs on the ancient. Some of Logue’s Homeric interpretations are still read aloud on stage.

The eclectic Logue — ironically a committed pacifist — was not without a sense of humor. He once wrote pornography under the name Count Palmiro Vicarion.