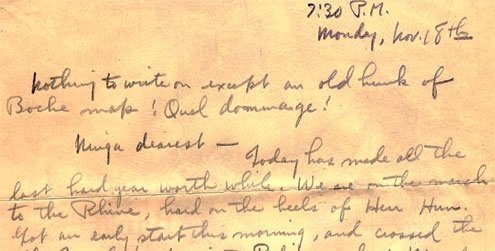 We are on the march to the Rhine, hard on the heels of Herr Hun, Lothar R. Long wrote.
W

hen Lothar R. Long, then aged 26, wrote this letter home to his mother, he was riding out a wave of physical, emotional and spiritual pressure whose only equal was earlier World War I battles. Long enlisted in the U.S. Marines Corps in Seattle in 1915, after bumming across the country and living in the YMCA while struggling to make it as journalist. He then served in the U.S. Legation in Peking until 1917. There he chafed at not becoming an officer as fast as he hoped and bemoaned the U.S. inability to decide (as it still does) over intervening overseas — in Europe’s Great War.

When the U.S. finally entered the war, after several years of political wrangling, the Northwestern University educated Long was the kind of material the Marines needed. Long arrived in France in January 1918 as a commissioned officer, spending the spring at Verdun, an “easy” sector, where German bombardments and the occasional raid seemed a predictable lark.

Though Britain had lost 58,000 young men at the Somme in 1916, the horror had yet acquire a tangible dimension in the U.S. Then, in June 1918 Long’s famed 6th Machine Gun Battalion, met the Germans in Belleau Wood. The battalion was the last word in modern artillery but it took the Marines’ hand-to-hand combat to stop the Germans. Belleau Wood turned the tide, but the Marines lost more men in a day than in their entire history. Long’s part was not so “wee infinitesimal.” He was an intelligence officer who mapped German machine gun emplacements while under fire and was also a qualified “expert marksman.”

This letter, jotted down on the back of a map, is joyous. But only weeks before Long, whose nickname was Lolly, wrote: “The dope I have gleaned from this business is: War is ten times more horrible than I ever thought it could be, but you can stand it infinitely better than you ever dreamed you could. Also there is in everyone a most surprising blood thirstiness and callousness to shooting human beings in cold blood; killing Germans comes as naturally to one as doing any business; also, the writer who … said that war is a game; and men, who are at heart only boys and who like games, will always have wars — unless women, who are not boys, take hold of them and stop wars — was absolutely right. They call this the last war! Don’t you ever believe it.”

Below is the unabridged transcript of the full letter.

Nothing to write on except an old hunk of Boche map! Quell dommage!

Today has made all the last year worth while. We are on the march to the Rhine, hard on the heels of Herr Hun. Got an early start this morning, and crossed the old French border into Belgium about 10:00 a.m. The first town we entered was Villers-devant-Orval. Oh, Ninga, Ninga, Ninga, I wish I could make you see the picture-a pretty, unscathed little white-washed village decorated with evergreen and flags for the triumphant entry of the American army, arches of bunting and evergreen boughs-over the top of the archways in rustic branches lettered ‘Aux nos Alliés, ‘ ‘To the sons of true freedom’ (isn’t that quaint), ‘Welcome’ our Marine band marching at the head of the column playing ‘Marseillaise,’ Belgian, French, English and American flags unearthed miraculously and mysteriously, and now hanging from every window (in the case of the Stars and Stripes mostly homemade and of a dear, pathetic conception represented by three or four alternate red and white bars and a pale blue field with half a dozen many-pointed stars sewed in it), happy, frenzied cheering Belgian men, women and children lining the sides of the narrow old world streets and shouting endlessly, huskily or shrilly, ‘Vive l’Amérique! Vive l’Amérique’ as we passed.

It was, I think, the finest, most splendid thing I ever experienced. Somehow, today alone has paid for the whole year — the loss of many comrades who died on the battle field, the times when we went for 72 hours without sleep, the times when we almost lost faith in our own strength. And somehow, I feel that Major Cole, Captain Sumner, Captain Major and the host of other brave officers and men of my battalion who sleep in the soil of France must know of this day, and been with us in spirit as we marched toward Germany.

Have just said good night to my host and hostess — the most cordial, lovable people imaginable. Night before last, a Boche officer slept in the bed I am going to tumble into in a few minutes. I talked for an hour with the old folks here. They have never stopped hating their oppressors since they arrived here in 1914. All the townspeople were fined 50 marks every time they failed to tip their hats to German officers, all their farm produce and stock was stolen by the Huns and they told vividly of how 43 men, women and children were lined up and murdered in 1914 as punishment for the surreptitious pot shot some Franc tiroir took at some Boche.

Ninga, if you only could see the desolate waste of some parts of France and talk to a few mothers whose daughters have been taken from them you would feel exactly as I do about war — this war I mean. Thank God, it’s over, but I’m sort of sorry this nation of barbarians [Germany] who don’t deserve to be considered as being of human origin, has not been completely exterminated.

Being just a wee infinitesimal bit of assistance in helping win this war is the one worth while thing I’ve done in my life. But, Ninga, I’m awfully glad it’s over, and that now the time when I shall see you again can be measured by months — without the mental ‘knocking on wood’ of having to say ‘if I don’t get bumped off.’

Don’t know when I’ll get a chance to write again. We are going across Belgium, through Luxembourg to the German border in the direction of Coblenz.