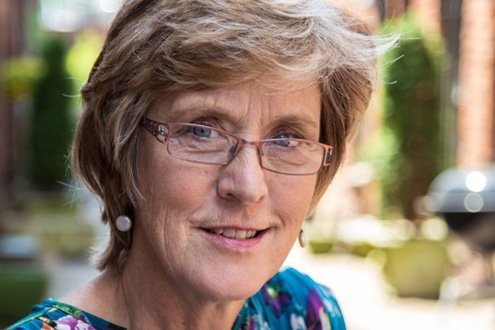 For a decade, author Pamela Schoenewaldt lived in a small town near Naples.
I

ncendiary battles igniting across the global landscape spur a vast market for war-related books. Among recent contenders, Pamela Schoenewaldt’s World War I historical fiction “Under the Same Blue Sky” (William Morrow: New York, 2015) provides a fresh setting and vivid views. Her story of German-Americans gives voice to their traumatically divided loves and loyalties for the length of the 1914-1918 Great War.

“Blue Sky” opens in 1914, under the soot-darkened skies of steel-mill Pittsburgh. Eighteen-year-old narrator Hazel Renner and her German emigrant parents anxiously follow news from a European war front that threatens country and kin left behind. When America finally enters the conflict in 1917, Hazel and her so-call hyphenated family feel the closing trap of public and private identity crises (hyphenated” was a disparaging epithet applied to foreign-born Americans).

In many respects “Blue Sky” is classic historical fiction: intense private dramas are satisfyingly layered with a wealth of detail. Shoenewaldt skillfully recreates far-off battle scenes, while tracing the American political and emotional landscape during and after World War I. That should be ample material.

Yet within this drama, Shoenewaldt also, and deftly, touches upon universal issues of grief, loss, abandonment, post war stress, death, and conflicted loyalties. It makes for a busy plot.

Let’s start with her prime sub-theme: the psychological effects of abandonment. For Hazel’s tale is launched by her 1914 discovery that now-dead birth mother, Margit Brandt, abandoned her. At three, Margit’s sister and husband, Katrina and Johannes Renner, secretly adopted her. Inevitably, Hazel wonders: Do I resemble Margit in some way? And: Who was that woman, really?

Since early childhood her hobby has been sketching. But images have recurred: a turreted castle; footmen in scarlet uniforms; and a great, mirrored ballroom. If these were pictures in her head, weren’t they possibly memories?

Katrina laughs that away, until the birth and adoption facts are forced to the forefront. Now Hazel learns that in her infancy, she and Margit actually lived in such a castle, in Dogwood, New Jersey. Called Mein Königsberg, it was built by Prussian-American Baron von Richtenhof, to recall his own birth home. Hazel decides she can only move forward in life when she knows more about Margit and her own infancy in his castle, something that’s impossible in her current situation. The emigrant circle in Pittsburgh dwells in the shadow of friends and kin dying “over there.” Her father Johannes is pathologically tormented by his homeland’s fate.

Meanwhile, “over here,” such hyphenated citizens are taunted as “krauts.” In the arms-machine of Pittsburgh’s economy Hazel and her family now confront ethnic hostility and violence. Searching a different life elsewhere Hazel leaves the city’s soot-filled skies.

And this is exactly when the author should have moved her protagonist to Dogwood, and that longed-for investigation of her earliest life.

Instead, Schoenewaldt first sends her protagonist far outside Pittsburgh, as teacher in Galways’one-room country schoolhouse, under peacefully soothing blue skies. It’s a sub-plot that suddenly projects Hazel as one of folklore’s beloved characters – a person gifted with an electric “healing touch.” Unfortunately, this interlude’s many pages dilute the novel’s central war drama. Especially since these miracle cure episodes don’t relate to Hazel’s sole nursing skills before and after Galway: her warm towel headache massages. They had eased her father’s headaches and will later help Baron von Richtenhof when she goes to Dogwood to confront her past.

By plot luck, she becomes clerical assistant to von Richtenhof, a rich fine-arts dealer, and the international business that covers for money sent to suffering German and Prussian families.

Through smooth plot coincidence we’ll find the Baron, too, has been family-abandoned. To eliminate this socially embarrassing homosexual son, his parents financed his life in America, and publicly buried his (empty) coffin in the family cemetery.

To Hazel’s good luck, two decades after her departure his castle still holds her childhood memories, right down to the mirrored ballroom. And here’s her then-beloved companion, the (also) abandoned-child Tom Jamison, handsomely grown up as Konigsberg’s carpenter and gardener. The kitchen is still ruled by the affectionate German-American cook Anna, who often tended infant Hazel, when restless, dissatisfied Margit pulled one of her disappearing acts.

But if Margit will remain a vague, unhappy figure in the past, Hazel’s current life in the castle opens new vistas, for her adoption mother, Tom, Hazel, and the Baron.

Schoenewaldt has significant talent for developing such complex maze of intriguingly common dilemmas within the strong historical framework of an exploding war and its aftermath. In all, her plot can sometimes seem a bit much of a much. But putting aside the Galway episode, these links flow into a highly readable account of America’s complicated Great War-era tensions. So much private grief accompanied them those tensions as “The War To End All Wars” raged to its climax and close. And solved nothing at all.