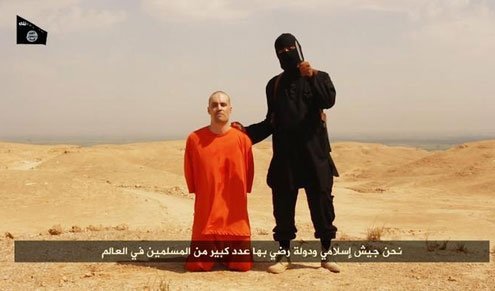 Heinous acts once fostered declarations of war, but that was before the advent of casualty arithmetic.
P

ostmodernism in the context of global conflict recently found a home in a New York Times dispatch about the possibility of the United States extending air strikes from Iraq to Syria to keep caliphate-minded ISIS, the West’s latest bogey mongrel, from overrunning the northern Middle East. “Any use of air power,” read a sincere but alarmingly naïve line, “involves risk, including the possibility that innocent civilians may be hurt or killed, or that a piloted aircraft might be shot down.”

Among the more alluring aspects of affluent life — a cornerstone in fact — is its seclusion from the meaning of actual war, which throughout history has included both the intentional and ancillary horrors consequent to human beings doing battle with other human beings based on differences in religion, political ideology or territorial claims. Affluence, and the security it offers, is a buffer against such chaos.

The introduction of the all-volunteer military in the United States and the gradual disappearance of mandatory conscription in Europe, both hailed as progressive measures, has gradually pushed war’s meaning toward the abstract — notwithstanding two massive U.S.-led Iraq campaigns in two decades. Discussing war’s realities is increasingly hindered by a prudent, Swiss-like reticence that ironically introduces a paradox when it comes to facing crises and debating the merits of intervention.

In its postmodern interpretation, war is an insuperable paradox. It is waged to rout or hold off one’s enemies but only if the death toll can be limited to maintain public enfranchising. Too many military deaths induce skepticism and erodes perceived nobility. Too many civilian causalities suggests a potential affront to human rights and justice, which any “disciplined” war should avert.

This teflon-styled vision of warfare — warfare as seen mostly from the air against enemies helpless in the skies — has overturned the rules of engagement, naturally giving wide berth to those who bypass Geneva and its conventions and choose a more literally grounded approach to war-mongering. Whether Islamist or fringe nationalist, most insurgent forces apply shock and awe literally. Risk and death are givens. Battle is gluttonous and revels its own adrenalin. Brutality is part of a raging merriment. Prisoners are taken only occasionally. Incidental murder is a commonplace, and helpful in cowing the conquered. Not surprisingly perhaps, these are just the ingredients that keep Western populations in the thrall of graphic television epics — and video games — oriented toward the barbaric, slaughter-heavy Middle Ages.

World War I was the last Western war to mostly keep civilians out of harm’s way. Before that, captured cities were sacked, looted and burned, their populations assassinated and women raped. War intentionally mocked innocence, even when conducted in the name of popes.

That changed dramatically after World War II, the detonation of atom bombs, and, for the U.S., the literally deadweight Vietnam misadventure. A new version of war was formulated, one taken as a restorative or rehabilitative measure. That style of war has since acquired a managed benignity heavy on unmanned equipment and advertised as an antidote to actual bestiality. If only real war weren’t still bestial. Two “tamed” Iraq conflicts have ended badly, undercut by caution and bad planning and rightly enraging professional soldiers who now question the worth of the campaigns in which they fought. A West that has sought to make war into a time-sensitive home repair “job” now struggles badly with enemies insensitive to building or ticking clocks.

This logic places the United States and its would-be allies, united in their wish to stall and defeat ISIS (and groups like it), at a nearly metaphysical disadvantage. The conflicts in Iraq and Syria are all about risk and much about death. ISIS and groups like it mock the clean-hands arithmetic of 21st-century Western warfare as hypocrisy. Bombing moral sense into Serbia in the 1990s worked in part because the military geography of the conflict was favorable to simple aerial deterrence. That is not the case in Syria and Iraq (or even in Ukraine, for those who seek to cross that Rubicon). These are vast and vague theaters of war that if engaged carry not just the risk of atrociousness but are atrociousness itself.

The underlying question, then, isn’t simply about merit of specific causes as defined in countless online and TV debates but whether the iPhone West still has the will to fight perceived enemies in lengthy and direct combat that includes the loss of piloted aircraft, real soldiers (perhaps by the thousands), and the lives of countless civilians.

War is hell. Watering down war is yet another kind of hell, one that Western opponents, right or wretched, refuse to do, united in their toxic resentment at the postmodern refusal to brawl. Before beheading journalist James Foley, ISIS angrily denounced America’s “proxy armies” and its air attacks as “cowardly shying away from a face-to-face confrontation,” rude but incontestably valid points. Sooner or later the West will have to decide if it wishes to go back in time to get to its lofty vision of the future.