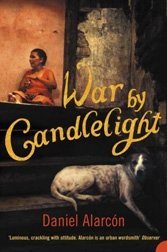 Alarcón’s blood bond to his native Peru is at the heart of this deft first collection. His characters ache with too much or too little Lima (“beautiful, disgraced Lima”); they love Peru to their own detriment (“our make believe nation”); they suffocate on its maddening behalf (“In Lima, dying is the local sport.”) In “City of Clowns,” a young newspaper reporter dresses up as a Lima clown after the death of his crook father. In “Lima, Peru, July 28, 1979,” an artist whose father is too blind to see his work transforms himself into a guerrilla who eviscerates dogs and paints their carcasses black. In “Absence,” a dreamy Peruvian painter succumbs to dejection and anger while in “promised land” New York on a two-week visa (“Americans always feel bad. They wander the globe carrying this opulent burden.”)

But life away from home is equally exhausting. A young Peruvian in love with Indian-American woman is forced to leave their Harlem apartment each time her traditional mother comes around (“Suicide on Third Avenue”). Alcarón builds rupture and exile into his characters. They’re pre-wounded. The Peruvian setting of the hurt is usually recklessly short on male stability. Fathers die. Boys are hurried-up men wearied by Macho wear and tear.

Alarcón’s most fertile territory lies between revelation and resignation. It contains no happy endings or epiphanies, only the daily Latin vaudeville to which Alarcón gives packed and sweaty substance — during a Lima protest, for example, “youths salivated, their hands in buckets, kneading water balloon as if they were their best friend’s girlfriend’s tits.”

The Lima-born Alarcón (1977) was raised in Birmingham, Alabama. He’s a transnational alchemist with a bright future.