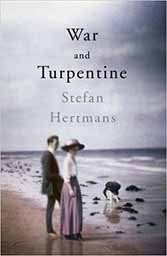 By Stefan Hertmans, translated from the Dutch by David McKay

When prolific Flemish-Belgian author Stefan Hertmans discovered his beloved grandfather’s extensive World War I diaries he resolved to conjure a book about the life and times his “childhood hero,” who died in 1981. But since Urbain Martiens’ notebooks covered only the war years and ended abruptly in 1919, he had to create both a prelude and an aftermath, adjusting the real and the imagined to suit his needs.

The majestic result is “War and Turpentine,” which combines his maternal grandfather’s gorgeously grotesque first-person account of trench warfare in Belgium with Hertmans’ enhanced portrayal of a modest man’s life and times before the war and deep into the 20th century.

Martiens was a painter, a meticulous copiest, and Hertmans pushes deep into W.G. Sebald territory to give his devoutly Catholic grandfather’s life both metaphorical and metaphysical meaning (“…he was tossed back and forth between the soldier he had to be and the artist he’d wished to become. War and turpentine.”)

Countless pages are spent describing Martiens’ Dickensian Belgian childhood (“hardened like a plant on a rock”) and his turbulent later years, his ethical demeanor and transcendent love of his mother (“There was something medieval about him, a shade of the eternal soldier, the chivalry described in the legends of the Grail…”), as well as the flawed vicissitudes of his art — a love picked up from his father, a church painter.

But the meat of the book is the war, Sergeant-Major Urbain Martiens’ war that, as Hertmans observes, “changed the morals, the worldview, the mentality and the manners” of his grandfather’s generation.

These hypnotic excerpts of the “absurd and meaningless carnage” are on par with the best combat writing ever, the once-bounteous landscape of Ypres and banks of Yser River transformed into sacrificial hosts on a deformed scale.

At the front, near “the dispirited landscape” of Ypres, Martiens writes of poison gas, madness, and children disguised as soldiers, “countless wasted boys of barely twenty” who, some gone mad, commit “thinly disguised” suicide by running into German machine gun fire “shouting, ‘Shoot me, you filthy Boches, go on and shoot me.'”

Boredom, humiliation and horror are the bedfellows of these “cavemen” soldiers, “destroyers and bitter men.” French-speaking officers disparage Flemish troops, with Martiens known only as “Marshen.” The troops themselves “look like zombies” or “emaciated ghouls.” They avidly roast rats for food. They slither through river trenches of their own shit. Some seek evacuation from the front by putting on “the blood-soaked uniforms of dead comrades and make a show of moaning and groaning.” Martiens’ offers poisoned pearls, usually through juxtaposition. A wounded fellow soldier is “blown open at chest level, and his organs were bulging out between the gleaming buttons of his jacket.” The gleaming buttons, a painter’s detail.

Later in the war, numbed soldiers are plowed with alcohol by superiors and told to charge. “The muck, the stench, the tedium, the sudden explosions, the frayed nerves, the occasional man dropping dead before our feet.” Faith recedes, or seems to, though Martiens still carries his rosary beads. “It is like the wrath of God, minus God.”

The killing of civilians and the use of gas change the rules of warfare once and for all time. “We were thunderstruck by the realization that our enemy no longer had any moral scruples whatsoever. This kind of psychological warfare was new to us. We had been taught a strict code of military honour, ethics and warcraft.”

And, after the armistice, still more bitterness wells up: “All around us, I see discord, envy, backbiting, betrayal, cowardice and looting, while the newspapers trumpet the praises of peace. We returning soldiers know better.”

The war stories are the book’s immemorial side, and they cut deep, replacing fields of honor with tales of “inner bedlam.” “How far I have strayed from what I once hoped to become,” the repeatedly injured and decorated Urbain writes at one point. It was a “straying” from which he and Europe never really recovered, making the second time around that much easier.