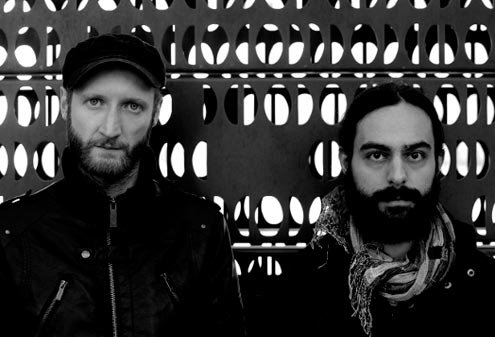 Dadub's Giovanni Conti and Daniele Antezza. "We feel quite uncomfortable with the idea that musicians live totally isolated from their material and from reality," says Antezza.
I

t’s sometimes difficult to buy into highfalutin concepts when discussing dance music. Most listeners regard it as a way to escape, to forget, to avoid thinking. Artists offering alternatives are fighting an uphill battle from the start.

But Italian duo Dadub have always liked the battle. In a revealing interview last year, Giovanni Conti suggested that the music he and Daniele Antezza make is fundamentally conceptual and inextricably linked to politics. As Dadub, their focus is “immaterial communication,” a higher plane of awareness for the listener about the world in which they live.

There’s no arguing the world isn’t a pretty place, and their new album You Are Eternity (Stroboscopic Artefacts) reflects that. This is a difficult listen for a few reasons, but it’s also an engrossing one.

The thread of political upheaval is evident on “Truth,” in the sounds of Henry Waxman querying Alan Greenspan about market regulation. “Life” covers a housewife’s experiences with LSD. Dadub’s overt attacks on government and personal freedom will resonate with anyone troubled by the Italian stalemate, Chinese transparency, or American infighting.

It’s dub-techno and ambient, not incidentally. The idea of taking a few elements and “upsetting” them stretches back to Jamaican pioneer Lee “Scratch” Perry. But even if there aren’t a million things in the mix, Dadub cleverly move them around in your headphones. Perpetually decaying synthesizers color the cold clicks and chirps of a beat like “Existence.”

Blended together, You Are Eternity becomes a dense, seamless listen in the vein of last year’s Voices From the Lake record, as well as releases from Stroboscopic Artefacts labelmates like Lucy and Xhin (no coincidence, since Dadub also master those releases). It is among the best Italy has to offer thus far this year.

Away from the dance floor and difficult body politics altogether is the personal introspection of North Carolina guitarist MC Taylor, better known as Hiss Golden Messenger. His latest release is the slightly downcast easy listening of Haw (Paradise of Bachelors).

This record ought to get a lot of attention for its folksy approachability, but Taylor is no overnight Southern songwriting sensation. Starting out in hardcore band Ex-Ignota, Taylor grew out of it over the course of two decades and eventually put a Master’s degree in folklore to use, culminating most recently as Hiss Golden Messenger in 2011’s lauded Poor Moon.

Though Taylor is the guiding force of the group, credit must also be given to former Ex-Ignota bandmate and Scott Hirsch for his multi-instrumental talents. These two are making magic on Haw in a way that only Poor Moon had previously approached and it’s a really enjoyable record to hear with two musicians in such effortless synchronicity.

Hiss Golden Messenger’s “mystical country” sounds like the work of an artist who knows better than ever what he wants his music to sound like. Haw isn’t an obvious standout, but its modesty is its greatest asset. The warmth and charm of Hiss Golden Messenger has never sounded better.