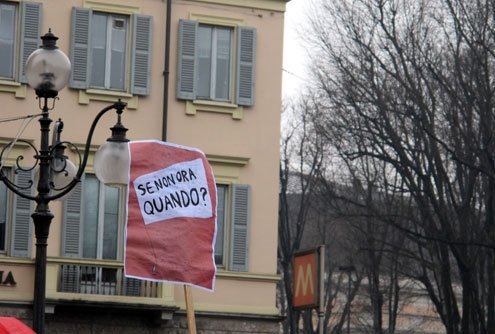 Se non ora quando? means, "If not now, when?" — but the answer is hard to find. Photo by Eleonora Saravalle.
I

recently participated in the “Se non ora quando?” rally in support of women’s dignity. “If not now, when,” was the question of the day, as in when will Italian women — and men — finally say “basta” to what journalist and politician Paolo Guzzanti calls the “mignottocrazia” (mignotta means tart, and not the dessert kind).

Global media trot out a litany of rationalizations to explain the apparent apathy of Italian women toward the abusive circus that is Prime Minister Silvio Berlusconi’s not-so-private life. They mention Italian macho-male stereotypes, cite a gender gap bigger than Kazakhstan’s, and the failure of Italy’s feminist movement.

None of these explanations tell the whole story and all overlook the background and magnitude of the huge achievements of Italian feminism.

In a wonderful (but undistributed) 2009 documentary “Ragazze la Vita Trema,” director Paola Sangiovanni filmed the story of Italian feminism from its origins in 1970s radical political, letting participants do the talking. Epic battles for divorce (1971) and abortion (1978) united women across the social and political spectrum. But by the 1980s, the fervor was spent. The movement was done in by the lack of uniting causes and internal ideological struggles. The fatal shooting of 19-year-old Giorgina Masi during a rally in 1977 (allegedly by an undercover police agent) may have been the last straw. As one participant recalled, “demoralized by the violence, we turned inwards; to drugs and our personal lives.”

Italy’s decline in international gender-gap rankings is a snapshot of this resignation. Other countries have gained while Italy has stood still.

In the 1980s, the U.S. feminist movement came up short on the Equal Rights Amendment and appeared to falter. But instead of turning inward to domestic life, American women opted for careers, entering male-dominated fields and eventually reaching levels of professional status envied in Italy. What did the U.S. movement have that the Italian one lacked?

Italian feminism was mercurial. It swept in fast and hard. It had palle, or balls. What it lacked was spalle; the supportive shoulders of history and strong parallel structures and networks necessary to sustain growth.

The U.S. movement originated in anti-slavery Abolitionism (many of whose leaders were women). The centennial Smith College t-shirt slogan “1875-1975. A Century of Women on Top,” wasn’t entirely facetious. By the 1970s, graduates of Smith, Wellesley, Vassar, Mount Holyoke, Radcliffe, and schools like them, each one a top-flight university founded to give women the education their brothers received at all-male Ivy League schools, had in fact made it to the top.

In male-dominated schools, these women would have been incorporated into traditional male structures, with predictable results. Instead, these women were taught and led by their own. Professors and presidents provided positive and immediate role models. They took charge and in turn expected leadership. As a result, graduates took their skills, expectations and views of women’s roles and power back to their communities and families.

In the small mid-western town where I grew up, university-educated women ran local cultural and charitable life. “Mere housewives” ran the multi-million dollar budgets and complex organizations of symphonies, theaters, churches and hospital auxiliaries. The League of Women Voters organized political debates and voter registration. Many parlayed their experience into state and national office. These women were the civic partners (at home, too) of male community leaders, who had no choice but to respect them and listen

My mother and all her friends had college degrees. I am the fifth generation of college-educated women; my great-great grandfather’s sister was the first woman admitted to the New York State bar. Though I say this with pride, it’s a means to illustrate not boast. Women such as these were not only role models for other women but fundamental in helping to train men — whether brothers or husbands — to respect the high expectations of strong women. In hostile male fields, I knew I had allies. My traditional father didn’t expect me to be a doctor or lawyer. He did expect me to lead.

My schools, whatever their shortcomings, taught leadership. Grade-school group projects, student councils and the many homegrown micro-democracies of American life integrate American women into the decision-making process. The process may have holes, but it exists and thrives.

Along the way, women acquired wide multi-layered support networks based on common ideals, competence and friendship. These resilient ties cut across political ideology, geography and class. If you hit a wall, there were places to turn, jobs to do.

Contrast this with Italy. Universal suffrage came — barely — in 1946. Very few of my Italian friends from the same socio-economic background have mothers with university degrees. With Italian cultural life run by the state (men) and charitable life run by the church (more men, in skirts), the domestic sphere was the only one Italian woman had left, regardless of class or education. Italian female social networks were (and are) based on class, town or family. So when feminism hit a wall, the only place to go was, literally, home.

Today, the absence of these parallel structures and fallback networks means that Italy’s problems hit women extra hard. It doesn’t look good for the gender gap.

Who is most squeezed by an old-boy society where merit means nothing? Women. Who loses in a slumping economy? Recent graduates, most of whom are women. Who picks up the slack for poor public services? Mother and daughters. If the correlation between school and work is low, who suffers? Girls without role models. Without good role models, what do girls choose?

Sara Tommasi, the Bocconi economics graduate and Berlusconi girl who picked a career in TV over one in finance may not have been acting unreasonably.

At the “Se non ora…” rally, journalist and author Beppe Severnigni complained that its slogans and form were tired and outdated. He challenged the organizers to find some fresh new ideas. Some old ones from America might be a good place to start.