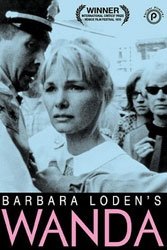 “Wanda” is the film Andy Warhol would have made if he’d taken his sleazy 8mm flicks seriously. Deliriously undergroomed with nonprofessional actors and Spartan script, it views like a documentary of godless living. Grainy film stock forges a Pennsylvania setting closer to war-torn Vietnam than American coal country. And like most Warholian characters, protagonist Wanda (Barbara Loden, who wrote and directed) is a bit mangy and dumb.

How many frills does a story about a deadbeat mom need, though? Wanda shrugs when a judge strips custody of her children (she also shows up at court with curlers in hair). Sluggishness gets her fired from a sweatshop. In cafes, she lets men buy her drinks if it gets her a roof. Wanda treats herself the way she treats her empty purse: constantly misplacing it. If she cares, it doesn’t show. She’s feckless and scattershot.

Pissing in the loo of an empty bar leads Wanda to petty thief Norman Dennis (Michael Higgins). He beds her, kidnaps her, and brutalizes her. Days of drifting driving later, Wanda mentions her ex-husband and kids to Norman the way one mentions a hairbrush or spoon. The only thing she owns, she says, is nothing. Norman — whose moods range from angry to angrier — fires back pithily: “If you don’t have anything, you’re nothing. You’re not even a citizen of the United States.” This from a man who had to steal the car he’s driving. It’s unclear if Loden is criticizing consumption as a form of American identity, or if criticism was even her point.

At times, “Wanda” is little more than crime romance — “Bonnie and Clyde” without the wink. Even the feminist overtones are debatable. Norman stuffs a pillow up Wanda’s shirt to make her a good, pregnant wife for his disapproving father. Then she helps Norman rob a bank. Some might call Wanda’s submission Stockholm Syndrome, or an affront to feminism. If anything, it vindicates feminism. Wanda is an escaped housewife. Housewifery just left her handicapped.

Loden’s husband, legendary director Elia Kazan, was allegedly jealous of the low-budget movie’s critical success at Cannes and the Venice Film Festival. Today, “Wanda” collects dust in film archives. Loden died of cancer in 1980. This was her only film.