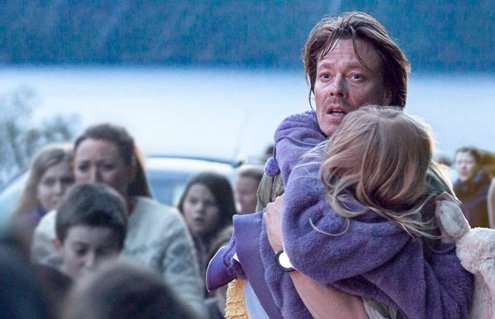 Kristoffer Joner as Kristian in "The Wave": first the people, then the calamity.
A

merican and British catastrophe films, whether about outer space or earthly contamination, have long been box-office limos tailored to stars with familiar faces. They conjure up an impending calamity, insert Tom Cruise or George Clooney for reassurance, and eventually unleash calamitous special effects to then let these charismatic boys (and girls) fight their way out of galactic or biological messes. Ridley Scott’s “The Martian” was a guilty pleasure above all because of Matt Damon’s ruggedly pretty face and self-deprecatory wit.

Now, welcome “The Wave,” a Norwegian movie by director Roar Uthag who rather impressively shows he has the guts to do what most European peers wouldn’t dare attempt: brew a Hollywood-style disaster story grounded and played out in house, without the slightest interest in warring galaxies or international coalitions (another disaster flick staple). Kristoffer Joner is Kristian, a handsome, furrowed-brow geologist about to move from his small fjord resort town of Geiranger (a UNESCO World Heritage site in western Norway) to take a job in oil-driven Stavinger with his wife and two children in tow. For years, Kristian has been among a small team of researchers monitoring a region with a history of massive cliff-slides, mountains shedding their sheer faces into waters below them, producing tsunamis.

Uthag’s story is far closer to twister than alien territory. Longstanding cracks in the Åknesremna slope overlooking the fjords around Geiranger have been widening for years. In the end, Uthag is merely making good on a worst-case scenario.

But he isn’t in a hurry. He spends 45 very focused and intelligent minutes on Kristian’s family life and final day at work (the Eagle’s Nest station overlooking the precarious mountain), leaving the suspense to build mostly in Kristian’s face (“I’ve got this bad feel…”) — until the alarm bells finally peal. Suddenly, Kristian’s reluctant departure is frozen solid by a disaster of epic proportions, which, of course, is when special effects kick in.

But Uthag’s preliminary work is done: he’s built a credible family unit in a small lakeside town headed by a father with a conscience and a mother, Idun (Ane Dahl Torp), with a steely inner streak. The calamity is more credible because of his family wrapping. At Eagle’s Nest, he creates a group of working class scientists who, typical of disaster plot lines, minimize impending danger until it’s too late – “We can’t cry wolf each time,” says the boss, Arvid, when sensors begin jiggling.

This is a calamity driven by a natural event, giving beauty a chance to flirt with, and then embrace, full-scale terror. Europe has many times been haunted by alpine and lake landslides, including several in Norway itself and Italy’s infamous 1963 Vajont dam break (a landslide caused the massive dam to rupture, creating a 800-meter-high tsunami that leveled several towns and killed some 2,000 villagers).

“The Wave” stakes out no new ground — there’s little left to find — but Uthag elegantly funnels disaster through his characters, rather than let his special effects apocalypse runs the show. “These mountains,” quips the ill-fated Arvid, “once they grab a hold of you, they never let go.” And while the latter half of the film is heavy the Hollywood maudlin — a loving husband in search of his trapped wife — there’s plenty to admire in this gripping Norwegian variation on disaster-oriented Americana, not the least of which is the scenery and, when it comes, the digitally gorgeous wave of mass destruction.