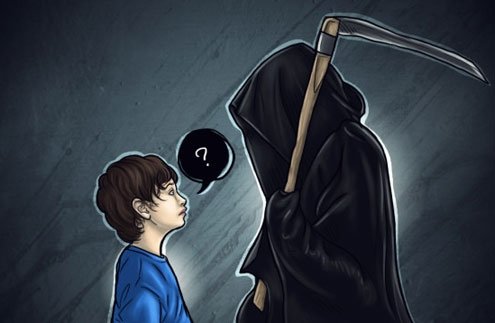 So your aunt is in heaven with your grandmother and your uncle and your aunt and all the other dead people you know?
N

othing is certain except for death and taxes, or so the saying goes. People like to avoid the latter. The former there’s no escaping. Death is inevitable. Today I’m preparing my taxes while getting ready for a funeral.

As a parent, explaining death is new territory. My older son is almost seven, the age of reason. A couple of years ago, I could have skated around the issue of mortality. Now I have to confront it. Full frontal fatality, as it were.

Coming from a large Irish brood, my parents never had to explain death to me – I was taken to funerals quite regularly. I understood early on that death is part of life. I also came to realize that the ritual of a viewing, a funeral and a wake, was not only a celebration of a person’s life but also a healthy way to mourn.

My husband grew up very differently. His family rarely included children in the ceremony, and afterwards mourners went back to their respective homes.

“To do what?” I asked, incredulously thinking everyone would throw an after-party.

Not me. I want to pay my respects, celebrate a life, and gather around those who loved and cared.

Two weeks ago, my aunt died. She was an exceptionally lovely human being. Unable to attend the funeral, I grieved privately. I sat on my bed with tears for her husband, her children, and all those she left behind.

When the kids saw me upset, they immediately wanted to know what was wrong. My husband tried scurrying them out of the room but I stopped him. Aloud, I said: “My aunt died and I am sad for me, but happy for her because I know she is in a better place.”

The little one said, “Okay,” and ran out of the room.

The older one’s wheels started turning. He stood there thinking and then said, “Mom you’re not going to die, are you?”

I said, “Not right now, but someday I will.”

My husband is superstitious. To ward off evil death spells, Rome men scratch their testicles (instead of knocking on wood). For Marco, the mere mention of death is like having the grim reaper on speed dial. So, as Marco stood nearby sort of grabbing at his genitalia, I got to the daunting task at hand, explaining death to a child.

“When your body stops working, your soul leaves and goes to a better place,” I began my improvised speech.

My older child got it fast. “So your aunt is in heaven with your grandmother and your uncle and your aunt and all the other dead people you know?”

Maybe it wasn’t so difficult to explain.

“That must be nice. They are all together.”

“Wow, Mom! You sure know a lot of dead people,” he exclaimed, and walked out of the room.

I was satisfied and Marco had stopped scratching his balls.

We just received word that an Italian relative died. Today we’re off to church and say our goodbyes. There will be no party, no gathering and no buffet.

As a member of a bi-cultural family, I try to take what’s best from each place in raising my kids. There are countless Italian traditions I hold precious. Funerals aren’t among them. For dealing with the departed, I’ll always defer to my Irish roots. The Italians know how to cook, but it is the Irish know how to send off the dead.