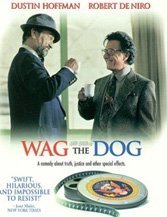 The first 40 minutes of Barry Levinson’s Clinton-era political satire are genius — for which you can thank David Mamet, who wrote it. A presidential candidate embroiled in a sex scandal hires spin doctor Conrad Brean (Roberto De Niro) to make the problem go away. Brean turns to friend and eccentric movie producer Stanley Motss (Dustin Hoffman) for ideas. The two decide to fabricate a war, picking Albanian aggression (hilarious of itself). The construct works so long as De Niro and Hoffman are building it, because it’s the enthusiasm of their zany make-believe that sustains the parody.

The filming of a fake war scene (actress orphan girl included) is a masterpiece because Motss isn’t leastly interested in his own dishonesty. He just wants it to work, same with Brean. It does, for a while at least. All falls apart when the conceit runs of steam, having served its purpose.

At that point, Levinson must tie up loose ends. Which is when suspended disbelief collapses and the characters go from ironic to mean. Myth-spinner Brean is compelled to do whatever necessary to keep his invention alive. Start-to-finish satire is hard work, and Levinson gives up in the home stretch.