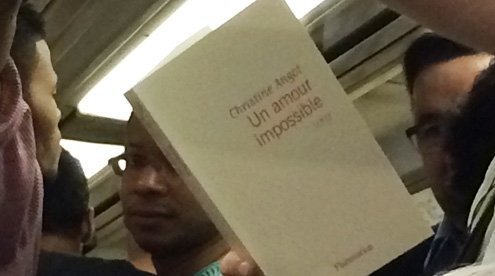 A notion of France in New York City.
H

e smiled at her from across the room with the unabashed intention of a Mediterranean man. She’d been around the world and New York City enough to know it when she saw it.

They kept their eyes on each other throughout the evening and when he stepped outside to smoke a cigarette, her suspicions were confirmed. She slipped out a moment later to join him.

Sorry, but do you have another one of those?

Pardon? You would like a cigarette? He spoke with a thick French accent, cocked his head and raised his eyebrows, the combination of which sent jolts through her chest.

She mustered a very weak oui, s’il vous plait, and tried to keep her fingers from shaking when he lit it for her.

They smoked in silence at first. Then he asked her what she was doing in New York. Foreign-born or not, he’d picked up on the citywide opener. She launched into an explanation of her many contract jobs and the artistic stuff that really was her passion.

She paused for a drag and watched his eyes. He didn’t seem to be following.

I mean, what are you doing tonight? Ce soir?

She sighed and looked down at the sidewalk. She wanted to throw her arms around him and tell him she would do anything he wanted to. Instead, she struggled through some high school French.

That’s too bad. I would love to see you before I depart.

Yes. I’m here for a few more days only.

He delivered the news with little emotion, or rather, as much emotion as two people who’ve only just met might safely invest. They stood in silence for a moment.

It is moments like this that separate the hopeful and the reckless from the guarded and grounded. She took her phone from her pocket and asked for his number.

Maybe I can call you after dinner? A plus tard?

She spent dinner distracted, grinning into her plate and gulping Cotes du Rhône. The rich and spicy red spread throughout her limbs and until she felt loosened and brave. She texted him from the bathroom in freer-flowing French.

She held her breath and double-checked her phrasing.

He replied with a smiling face. Je vous attende. I’m waiting for you.

Ou es tu? She asked where he was and gave the address to the first taxi that passed.

Her French comprehension thrilled her nearly as much as he did. She felt alive, as if the blood was rushing through her veins with greater fervor than it had for months, activating a part of her mind that had long lay dormant.

She called him from the lobby of the hotel where he was staying.

He told her to come up to room 2367. And perhaps for the first time in her life she understood numerical French.

He answered the door and her ushered her in with a kiss on each cheek. The formality of his welcome threw her momentarily off guard, until she remembered that they were no longer living in American English. He used the Vous form when he kissed her neck and slid the bra strap from her shoulder.

He said a muffled, s’il vous plait, with his rough upper lip against her inner thigh, though he had no intention of asking permission.

That night they loved each other in his language. And when she rose to leave in the morning he kissed her eyelids and whispered,

A toute a l’heure? See you later?

She smiled and said nothing. This was New York after all. No sense in entertaining fantasies. She returned home and stood in the shower until she couldn’t smell him anymore.

She emerged to find her phone on the floor, vibrating.

Vraiment! I hope to see you later….

She paused and consulted her Harrap’s Mini French.