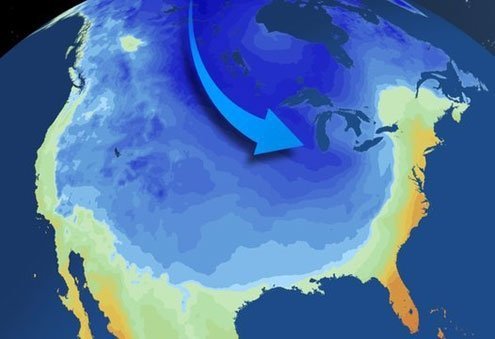 The Polar Vortex, emphasis on the V.
W

hy the fascination with weather, with the cold bite of polar air or the sinister swirl of a hurricane, each one a sudden slice of satellite photography framed in the way marquee lights once announced the grand celebrity of a star-laden movie? Hurricanes and tornadoes star for half the year, arctic air and blizzards taking over in winter. Their birth and substance are dissected allegedly in deference to the threat they pose to human life. But it’s more than that. Natural tempests are schools of tyranny that no one can control or rein in. They are what a mostly democratic world still has left of emperors and conquerors whose armies once had their way among frightened and humbled people. They are unstoppable and can only be watched. The command of choice is “take shelter,” and only weather extremities any longer permit its convincing utterance.

The wages of a warless era was long ago identified as generalized anxiety, and the depression that accompanies it. Appropriate, then, that bad weather itself is barometric pressure falling, often called a depression, air and water in violent contact leaving the impressionable to imagine the collision in human terms.

The movement of these fronts, seen from above, resembles the more literal travel of invading armies, their battle-lines colored, with wads of geography available for the taking. Being under siege still exerts its own fascination. Storms undo travel and unite dialogue. The coldest air inspires frailty, if not futility, since no ingenuity can blunt its force. Atmospheric instability is examined with gossipy zeal.

Part of this is the theater of the visual, and how at home it is with disaster. Now as never before threatening weather colors its own picture book, including the before of swirls and the after of broken buildings, all of it instantly documented. The human eye is awed by literal breakage and eager to participate in the easy empathy for the undone. It also responds to color as a menace – right lights, orange alerts (“Color … is a psychological problem, not a problem in physics,” American painter Hilaire Hiler wrote about art in 1942, foretelling the impact color would have in photo and video images).

Until 50 years ago, when satellites began peering down, weather breakage came mostly without warning. All that was left was a cleanup — and burying the dead. Weather was a cosmic surprise.

The surprise gone, for the better in terms of prevention, media peddles storms and cold as movie stars coming soon, more or less villainous, more or less grand, depending on the morphing size of the swirling. The words “epic” and “historic” acquire their own dimension, revised with each new and bigger event so as to go to the front of inner overload’s concussive line. Attention disorders are and will remain in disorder’s pharmaceutical thrall.

Extreme weather is perhaps the only larger-than-life havoc still available to a global citizenry mostly inoculated against a greater sense of plague or distress. It affords an ironic break from more intimate self-involvement, since no one’s immune; nor is there treatment or therapy.

The recent “polar vortex” grew in celebrity in part because the word “vortex” suggested conspiracy, Black Holes, and forces too large to reckon with. Cold cosmic chaos is easy to peddle. And weather sells.

“War is a Force That Gives Us Meaning” was the title of a 2003 book by foreign correspondent Chris Hedges who argued that conflict displaces human alienation by giving soldiers and patriots cause and license, no matter how grotesque the conflict itself. They were ennobled through pretend belonging.

Weather now serves a similar purpose. Its collective ennobling is grafted from a broader sense of peril. It is available both to those literally under the weather and those who wish to imagine what it might be like to endure high winds or biting cold. Those in the weather itself are more mundane: they merely endure.

As artificially intelligent and digitally colorful as the new planet has become, the compositely virtual always at the ready, humans are still most attracted not by that which builds, but by that which might ruin. It is an aspect of awe that hasn’t changed in 5,000 years of human history. The prospect of ruin, or of the unmanageable, is that which most intrigues the affluent mind. Remote from survival struggles and beset with an overactive sense of vulnerability, they come to see bad swirls and bitter cold as distracting succor from the inner storm.