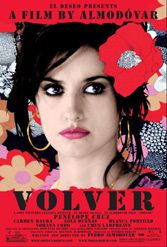 After his predominantly male excursion in “La mala educación,” Spanish master Pedro Almodóvar is back with a film full of women, including Penélope Cruz, Carmen Maura, and Lola Duenas. Incest, funerals, a girl who murders her father, a terminal patient, a mother who returns as a ghost, a body buried in the woods: Almodóvar personalizes these themes with originality and lightheartedness.

At face value, this might seem like a sad and morose film. In fact, it’s anything but. Cheer and hope win the day.