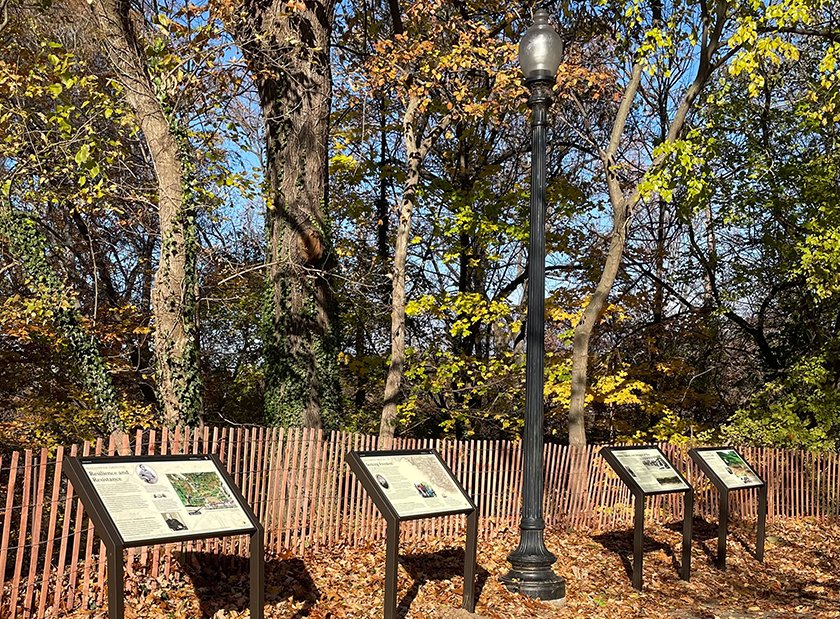 Walter Pierce Park is remarkable for being one of the few places where runaway slaves are buried alongside white people.
A

t first blush, Walter Pierce Park doesn’t look like much of a historic landmark. It’s a quarter acre expanse of grass surrounded by a six-foot high steel wire fence. You could easily mistake it for a local playing field or maybe a dog park — except that the fence gate is locked and there are no hounds in sight. And the location makes it all but invisible to passersby. It’s tucked behind a Metro bus resting station, and away from the bustling thoroughfare.

In fact, the full weight of the site’s significance only hits you when you stop to read the commemorative plaques at the Park’s entrance — and reflect on who’s buried there and why.

Established in 2008, Walter Pierce Park turns out to be a cemetery of a very special kind. There are no headstones or grave markers but below its calm surface lie the remains of some 4,800 former Black slaves that lived in Washington, D.C. during and after the American Civil War.

Some were ex-Union soldiers that chose to settle here after the war was over. Others were escapees from Southern plantations; they made it this far North thanks to the efforts of the Underground Railroad, a system which allowed millions to move from bondage into freedom.

The graves were lost to history after the cemetery closed in 1890. As Washington, D.C. grew in size and became a national tourist attraction the park came under the authority of the Smithsonian Institution, and became an adjunct to the National Zoo. The graves remained unperturbed.

Walter Pierce may be the only cemetery in Washington, D.C. and one of only a few nationwide where Blacks and Whites were buried together.

For years, waves of new arrivals to Adams-Morgan, the neighborhood in which the park is located, heard rumors about these graves. Local resident Heather Foote, who was tending her plants in a community garden, was shocked to hear the news and became part of the original core group that pushed the city to commemorate the site.

That effort took on renewed vigor in the 1990s when local developers announced plans to build an apartment complex on top of the graves, disturbing the buried remains. Foote and other protesting residents demanded time to document that the graves indeed existed.  Initially the city balked, but as protests mounted, it granted the neighbors a reprieve

Over the next three years, a newly formed concerned citizens group, with the assistance of a local scientist, John Mack, was able to prove that the graves of runaway slaves were in fact to be found there. Through patient and painstaking excavation, they uncovered a handful of gravestones and skeletal remains, as well as mementos that had adorned the graves.

The association’s preliminary evidence was enough to convince the city — which had publicly denied such graves even existed — to add its own funding to the effort.  The city also granted association members access to 100-year old burial records, which suggested the likely magnitude of the burial site. With the help of ground sensing radar, the association was able to confirm the exact number of graves: a total of 4,834 persons — mostly Black men and women, but also several dozen Black children — had been buried in Walter Pierce Park.

Walter Pierce isn’t the only cemetery for former slaves that’s been excavated and commemorated in recent years. Citizens groups nationwide — but especially in the South — have begun or completed similar efforts. The movement’s supporters say grave restorations are a critical part of the struggle against systemic racism, which once saw most enslaved African Americans buried on plantation grounds or plots of land owned by white people, usually with only rocks serving as grave markers. Prior to emancipation, racial prejudice wasn’t just a fact of life, but of death too.

With Congress in a state of gridlock, any new push, if it comes at all, will have to wait a while, maybe even years.

The Walter Pierce cemetery may be a partial exception to this trend. It turns out that thousands of Quakers that once helped slaves fight for freedom are buried alongside them. According to historians, Walter Pierce may be the only cemetery in Washington, D.C. and one of only a few nationwide where Blacks and Whites were buried together, defying racist segregation laws.

What’s next for the restoration movement? So far, efforts to support the movement with federal legislation have failed. The U.S. Senate passed a version of the African American Burial Grounds Network Act, which would fund a national database of historic black burial grounds, assist with site preservation, and disburse grants for research. But Republicans managed to get the bill tabled in 2019 and Democrats, despite regaining full control of Congress in 2020, have yet to push for its successful passage. With Congress in a state of gridlock, any new push, if it comes at all, will have to wait a while, maybe even years.

That’s all the more reason to celebrate those buried at Walter Pierce Park cemetery, its supporters say. It’s a symbol of what’s possible when people of good will come together to celebrate the power of interracial unity and solidarity. And now that city-funded plaques formally mark the site, supporters are hoping schools will organize student visits and are pushing for the Smithsonian to acknowledge it on tour maps.

“White and Blacks fought together and were buried together,” one member of the recently-formed Walter Pierce Park cemetery Association says. “Now more than ever, we need to keep their vision alive.”