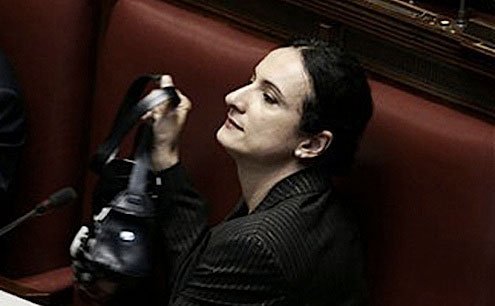 Luxuria in parliament in June 2006.

Since the mid-1980s, Italian political parties have unabashedly enlisted celebrity candidates to attract voters. Hungarian-born porn star Ilona Staller, known as “Cicciolina,” began the trend in 1987, when she was elected on the Radical Party ticket. Dozens of television personalities have since made political bids. Though Rifondazione’s support for Luxuria, who ran in Lazio, was dismissed by some as a public relations ploy, gay activists knew better: Luxuria has been active in gender and rights issues for over a decade. Her web site vladimirluxuria.itlists dozens of upcoming transgender and gay-related events. Turin recently joined Rome in hosting a Gay Pride day.

Luxuria still faces widespread gender typecasting, however. A Reuters news dispatch in February opened this way: “Vladimir Luxuria will ditch the sequins, feather boas and bouffant wigs when she enters Italy’s parliament. The drag queen says she will be Europe’s first transgender member of parliament and wants to be seen as a serious politician.”

In person, Luxuria is easygoing. She wears a simple, all-black outfit: large shirt over a roomy gown. The only colorful touches are a bright orange pashmina, coordinated black sneaker laces, and sparkling red nail polish. She wears no make-up, but her eyebrows are brushed and sculpted. When a woman in her sixties approaches her with congratulations, Luxuria thanks her warming and kisses her. She then excuses herself for the interruption.

Did you ever imagine that your career would take a political turn?

I got into politics when I was 16. I decided I didn’t want to stifle my gender identity by adjusting my appearance and feelings. I showed others what I am, who I am, facing social prejudice. At the time, I was involved in the Mario Mieli association for gays’ rights, which was based in Rome. I still recall a 1994 meeting when I asked, “Why are Gay Prides held in all major western cities and not in Rome? Why don’t we do it?” I started organizing, and the first Gay Pride was held in Rome that June of 1994. From then on, I was in the organizing committee annually, leading up the renowned World Gay Pride of 2000. I’ve also been involved in many AIDS awareness efforts. I gradually realized that this [election] was the right cultural moment for a candidacy such as mine.

You faced prejudice, no doubt.

Two types. One came from my being in show biz. Some people alleged that I was the umpteenth TV, radio character lent to politics to attract votes. The other was a sexist prejudice, in which a transgender is considered someone who can cause disorder and can undermines a traditional family’s solidity.

TV helped me redeem myself. To opponents who had depicted me as a bizarre character, I showed them that they were the ridiculous ones: they made absurd gags, in bad taste and outside all civility. It was a shock-therapy. I found out that sincerity and spontaneity, in addition to the will to do good things, can give hope to others. Being aggressive wasn’t necessary.

What most affected you during the campaign?

The positive side was the large consensus. It wasn’t a one-theme candidacy. I had a large number of people coming to hear me: mothers, gays, lesbians, transgenders, fathers with children, and young people. In general, people were trusting and appreciative; some still stop me in the streets and call me onorevole.

The negative episodes were not so much the silly gags: after 12 years of them I’ve learned that if you get mad you make somebody’s day. If you’re ironic and answer with intelligence, showing you’re not hurt, you demonstrate that you’re immune to attempts to void you as a human being. I have a rich repertoire of comebacks and never given anybody the last word.

Physical aggression is another story. When supporters of Alleanza Nazionale and Forza Nuova (two rightist partities) hindered me from talking in Guidonia, throwing fennel at me [finocchio, fennel, is the Italian term used to identify gays in an offensive way] and yelling insults, I got really scared. I thought I might be beaten up at night when I went home.

What are the priorities on your political agenda?

First, we have to unite Italy. People say that Italy is split in two halves. Recent policies have emphasized divisions and privileges of the few. There are many people — retirees, young people still looking for jobs — who have no privileges. There are many families living at the threshold of poverty line.

When I went South, I met many unemployed people. I found discrimination even more cynical than sexual discrimination — it comes from poverty and strikes everywhere.

Then there are immigration policies. We must give a respectful chance to those people who knock on the doors of rich but often selfish countries, the destitute.

Then there are those like me, gays, lesbians and transgenders who are torn, at least compared to heterosexuals. Politics refuses our existence. We must reunite Italy and make people feel that there is a government that talks to everybody.

We need to ratify the law on civil unions. I’d like to see an anti-discrimination bill to punish those who call someone nigger or frocio (offensive term to indicate a gay person), especially in institutional venues.

Why did you choose Rifondazione?

I see it as a party that has the fight against social injustices in its DNA. I like a party that embraces civil and labor rights. A society where gays have civil rights is not enough if people are not respected at work and lack labor rights. We can’t be blackmailed in society and at work.

On a spiritual note, are you a believer?

I have a great spiritual dimension that I don’t want to stifle or ignore. There’s pan-religious teaching that suggests life rewards you for your actions. I have a great sympathy for Buddhist philosophy and in difficult moments I practice Buddhism. I am also an enthusiastic reader of the New Testament, because I believe there is everything in Jesus’ words. I think that all those who are Catholic and gay and live with this conflict can be comforted by reading Jesus, who came to the rescue of outcasts.

What about the Vatican?

Ethical debate leaves us out in the cold because dogma indicates that sexuality is intended for reproduction. If sexual pleasure is not recognized, then gays, lesbians and transgenders — who can’t conceive — are automatically considered sinners; they are confused, immoral people. But couples who can’t have children and have been cut out by the law on assisted reproduction, which bans donor’s sperm/eggs, are also on the outside.

The Catholic Church has the right to express its opinions, but deputies have the responsibility to uphold a secular parliament. I appreciate Cardinal [Carlo Maria] Martini’s flexibility regarding the use of condoms and concerning adoption. But these openings can’t influence us. Politicians must remain secular.

Have you already chosen your “work” outfits?

My sister Barbara took care of it. She works in a clothing store in Rome and has good taste. I trust her totally. Moreover, she’s my size, same height, same shoe size. So she can try the outfits herself first.

You seem at peace. Are you in love?

With life, with my parents, my sister, my friends. If you refer to a fidanzato, (fiancé) no, I don’t have one yet. I’m waiting to ratify the law on civil unions to find someone to be civilly united with.

About the Author: Clara Park

Clara Park is a freelance journalist and a communication and change management consultant based in Rome. She writes on world news, gender, human rights and development issues for a number of publications, while also being a staff writer for the Italian women’s news agency [email protected] Second generation Korean, Clara was born and grew up in Italy, but also lived in the U.S. and Korea and travelled extensively in Europe. She holds a bachelor's degree, cum laude, in communications from the University of Michigan, and a master's degree in communications management from the Annenberg School for Communications of the University of Southern California.