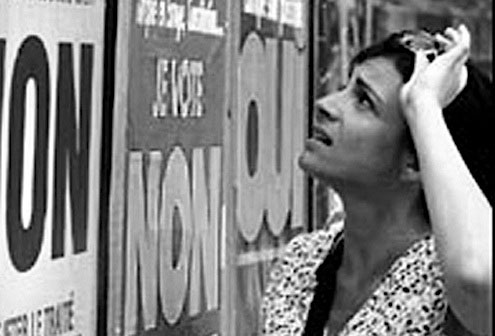 n a sunny Sunday when a German pope sounded much like his Polish predecessor, bristling at “unbridled consumerism, religious indifference and secularism closed to transcendence,” provocative France rejected the ungainly European constitution. Alone, these cultural circumstances — Polish pope, German pope, and a pan-European constitution including former Soviet bloc nations — would have met a dismissive reception in 1955. In five decades Europe has transformed and been transformed, with difficulty.

But Europeans still crave the polemical. Dissent unites incompatible leanings. Elections of any kind are a spillway for eclectic resentments. In France, ethnic racism, with its Christian-Muslim overtones, straddles bitterness against longer working hours, which in turn abuts hostility about the EU’s movement toward Turkey, the Ukraine, even Russia. For many, such dalliances betray what’s left of Gaullist pride.

Peddled in stagnant economic times, the European constitution was arcane and faceless enough to sum up dismay. It advertised a status quo and a tired president, Jacques Chirac, France now blames for its sore throat. Chirac’s push to ratify effectively engendered a no-confidence vote. In the wake of useless opposition to the Iraq war, saying “no” felt like cathartic proof-of-life — hardly an uncommon response in put-upon Gaul. If France submitted whiningly to the American super state, it hardly needed Brussels’ smugness as an encore.

The harder Chirac rode the European mule as his own, the quicker the French mood descended from exasperated to testy. Modern conceits aside, France remains a fickle Latin nation wary of Puritan work habits and disdainful of being made to feel subaltern. The world is a plot against it.

But hysteria at the vote’s outcome is as ludicrous as it is common. In the absence of compelling news, late spring wrings hyperbole from humidity. The New York Times, for example, reported that France had “turned its back on half a century of European history.” The poll’s outcome, the newspaper asserted, presaged “an abrupt halt to the expansion and unification of Europe.”

French hodgepodge neo-nationalism is fashionable spasm from a menacing past. “No” to Europe is retro cool; it confers self-esteem on an electorate eager to bang a loud drum. But that’s all. To vote against belonging is to belong; the essence of “anti” is affirmation.

Uniting Europe, an absurdly ambitious project, is already a well-advanced undertaking. Constitutional rejections notwithstanding (others lie in wait) the project is not in jeopardy. The enterprise is clunky, overwrought, often unbearably pretentious, but how else to imagine 25 nations and 25 national cultures — some at war less than a century ago — groping awkwardly for operational affinity on a meanly competitive planet?

The EU now includes Eastern Europe, often without seeming to want to — cheap-labor Poles were a scapegoat in France (as Albanians are in Italy). It embraces its Muslim contingent while also wishing it gone. Multiculturalism is a burden. France in particular cannot find its balance regarding the United States. The ex-Alpha envies the new dog.

Nationalism is now the business of a youthful generation hormonally remote from World War II. Many are tribally predisposed to affect the purity-of-country posturing of antediluvian Europe. Tattoos are the flags of yesteryear, and body-piercing kin to the bravado. But the totality is faux-nostalgia that won’t last. Europe abounds in institutional and social hypocrisy, but none mimics the systematic anti-egalitarian ism of the 1930s.

Even anti-elite, anti-intellectual voters — American “hicks” transferred to countryside France — are more informed than their 1930s counterparts. They may find Chirac reprehensible, but few would choose the National Front in his stead. That came clear during the Jean-Marie Le Pen first-round debacle of 2002.

If the French “no” vote delivers a decipherable message it’s that Europeans aren’t sure how their unwieldy confederacy should operate, under what rules, and with which friends.

Should Europe be a post-modern pan-national commodity, an engine of nations driven by cash, commerce and currency to think alike? Or should it be a quilt of progressive nations sensitive to have-nots and humanitarianism? A socialist Europe based on traditional liberal ethics (and flexible work hours) is at odds with Davos-driven nations that worship the ground on which capital is traded, and wish to encourage its movement at almost all costs. It’s an old row with many ethnic twists. For now, there’s no one way out, which explains the need for an abstruse 441-page constitution that tries to reconcile the irreconcilable. Success itself is for now secondary to the ongoing attempt to succeed.

The German pope may be right in fearing that the much of the West is tormented by consumerism, religious indifference and non-visionary secularism. But France projected the opposite of secular indifference, which in many respects proves the contentious continent is very much alive and well.