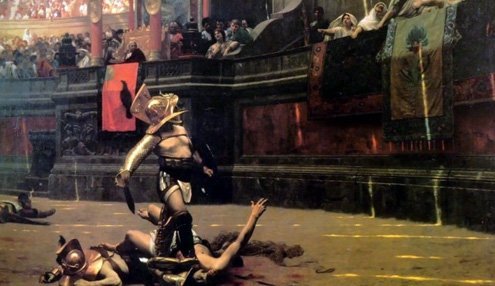 I arrive dressed in a Republican-era Gladiator costume…
W

hen it comes to self-fulfilling stereotypes, Roman males are at the top of their game. Honey-lipped Latin Lovers drizzle compliments on girls they’ve just met and blame the hot Mediterranean blood for eager hands on first dates. Proud and passionate, they’ll fight to the death for your “love” with words as weapons. Poetry before the pounce.

Nia needed a gladiator. When a group of executives requested an ancient Rome-themed dinner party, Nia went to the yellow pages. This is what she found:

“Hi, uh… this is Nia Janati from Incentive Vacations. I need a Gladiator — I mean, for a tour group — not for myself, that is… just give me a call and I’ll tell you what I’m looking for. Thanks!”

A few hours later a call came through to her extension. A gravelly voice greeted her.

“Yes? Hi, thanks for calling me back.”

“Of course. So, tell me what you’re looking for?”

“Well…” she began. “I have a group of people coming in from the States…”

“And you? Where do you come from? You’ve got a cute accent.”

“I studied with a Persian girl, she was incredible… so dark and intense.”

“Oh, I don’t look anything like that. My mom is basic white. I’m blonde and blue-eyed.”

“A real California girl then?”

“Listen, Massimo, I really need to book this dinner. Can you tell me a bit about what you do?”

“Officially I’m an accountant, but my hobby is ancient Rome. I’m working on a Master’s in Roman military history, and actually speak Latin.”

“Well Miss Nia, I work with a few restaurants that prepare ancient Roman cuisine. I arrive, dressed in a Republican-era Gladiator costume and give an interactive lecture with a trivia quiz. You can check it out on my website.”

Nia cupped the phone between her ear and shoulder and typed in the address as she spoke. “Wow. That sounds great actually! What’s the prize? A Roman coin or something”

“Very funny.” The web page loaded slowly. A pair of sandaled feet and calves appeared, the pixels melting into view.

“I’m not kidding,” he murmured into the phone. Nia could swear he was exaggerating his Roman accent.

She watched as naked, muscular thighs and the red-fringed tunic came into view.

Nia’s breath caught in her throat. Was this actually happening? The image loaded completely and two coffee-colored eyes stared back at her from the screen. Dimpled cheeks framed a wide smile.

“Fine. But why don’t you pick me up at the office instead? You can sign the contract and then we’ll see.”

Nia raced home during her lunch break to change into a black top with a black v-neck sweater and comfortable flats, nothing too enticing. She was a professional after all.

He rang the bell at 7 p.m. sharp. She buzzed him up and dabbed on some tinted lip gloss.

He bounded up the last few steps and took her in from flats to blushing face.

“Good evening! You’re even prettier than you sounded on the phone.”

“Thanks.” Sweating, Nia turned and spoke to the floor, “Come on in. I’ve got the paperwork. You can read it now or take it home and let me know tomorrow.”

He grabbed her shoulder. “Let’s go. You can explain it all to me over dinner.”

As they drove toward the Castelli Romani he filled her in on his day job as an accountant and his real passion, ancient civilizations…

At a red light he switched the radio to smooth jazz and purred, “When you told me you were Persian, that was it. I find your culture fascinating.” He slid his hand from the gear-shift to her knee.

Nia felt his gaze and turned toward to window. “What a pretty drive!”

His fingers crept up her thigh. “Let me see those pretty eyes!”

She turned to him, incredulous. “Massimo, what are you doing? I hardly know you!”

“Carpe Diem, no? That’s what I like about American girls… they’re so open. So free.”

That night Nia swirled away her inhibitions with the wine in her glass. Hours later she would “open up,” but not all the way. A week later she opened her email:

She spent the morning Googling the translation and called him over lunch.