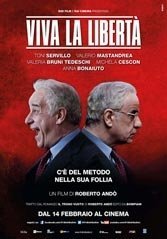 For those who insist old jokes are the best jokes, Sicilian writer-director Roberto Andò’s film plays off a number of familiar ones: identical twins, mistaken identity, the wise fool. During a national election campaign, Enrico Olivieri (Toni Servillo), the leader of a party with more than a passing resemblance to Italy’s Partito Democratico, goes AWOL. He’s tired and disillusioned, trapped in a role he no longer understands.

Scrambling to keep the party together, Olivieri’s handler Andrea Bottini (Valerio Mastandrea) unearths Olivieri’s twin brother Giovanni, a slightly batty philosophy professor just released from a psychiatric clinic (also Servillo), as a stand in. That the outcome of the ruse is predictable doesn’t make the brother’s poetic approach to politics, and the stiff politico’s rediscovery of joy, any less charming.

Servillo’s mastery of two roles steers the film away from potential traps. He uses the same expression in different contexts to show how the twin brothers’ subtly grow into their new identities and confront their old ones. Several of Italy’s best actors turn in winning performances, including Valeria Bruni Tedeschi, the twins’ old flame now living in Paris (where Olivieri runs to).

The film is based on Andò’s 2012 book and uncannily presages Italy’s recent national elections. Here’s a delightful movie that gently skewers Italy’s political establishment while treating us to the sight of Angela Merkel dancing.