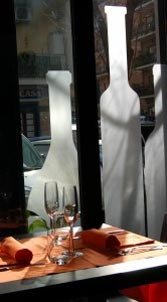 egend has it that the god Bacchus once descended from the heavens to the slopes of Campania’s Mount Massico where he met a poor but honest farmer named Falernus. The gracious farmer pretended to ignore Bacchus’ identity while offering the deity a modest meal. Touched, the mighty god of grape harvests, wine and ecstasy transformed a glass of milk into wine and offered a sip to Falernus. When Falernus woke from his drink-induced slumber, his entire mountain was covered in lush vineyards. Wine was suddenly the property of man. Out of the legend came Falerno del Massico, a wine made primarily from the black Aglianco grape.

My latter day Bacchus was an American chef who invited me to a tasting and meal at the Osteria Enoteca 20e20 in Rome’s African quarter (the names of the streets all relate to Italy’s one-time North Africa colonies). Busy by day, the residential neighborhood slows by evening. It’s also easy to reach from anywhere in Rome.

The Aglianico grape also yields Aglianico del Vulture superiore, Falerno del Massico and l’Aglianico del Taburno, each one bearing the name of hill where their vineyards are located (Vulture, Massico, and Taburno).

Aglianico grapes are at home in the region’s deeply volcanic soil. According to Vinosia reps, the location of the vineyards near Mount Vesuvius and the sea may have saved the wine from the otherwise devastating phylloxera plague of the late 19th-century. Phylloxera is sap-sucking parasite that crept into Europe from North America, inadvertently introduced by British botanists who collected American grape samples and brought them back to Europe, unaware of the consequences.

The resulting contagion destroyed two-thirds of all European grapes (some estimates range as high as 90 percent) and brought south European winemaking to a near-standstill. To contain the damage, most wine growers began grafting American rootstock onto European ones to build up immunity.

But the hardy, volcanic conditions indigenous to the Campania coast apparently fended off the invading insects. Aglianico remains among the few so-called “piede franco,” or ungrafted grapes, ones that never needed “vaccinating” against the killer pest and as a result maintain their original identity.

On to the meal, which began with a fish salad appetizer paired with Greco di Tufo DOCG L’Ariella 2010 (good choice; Greco di Tufo is a quintessential fish wine). But I couldn’t help look ahead to my beloved Aglianico DOC 2010, served with ravioli in pecorino cheese, with pine nuts, bacon and mushrooms. A young Aglianico is homemade pasta’s best friend, so the match was perfect. It wasn’t the best Aglianico I’ve ever had, but the €6-7 price tag made it interesting.

Next up was Taurasi, a wine whose city has its own venerable history. Originally a Greek settlement, Romans legions overran it in 268 BC. According to Roman historian Livy, the resident Greek population had already started growing Aglianico grapes (vitis hellenica, or Greek vine), a tradition that the conquering Romans picked up on and continued.

In fact, I’d recommend a Taurasi Riserva with all roasted red meat, skewered meat, well-flavored lamb, and even with mature cheese. It has a great quality-to-price ratio and its structure can be just as impressive as more expensive wines.

Here’s a list of some of the wines I tried with price range.