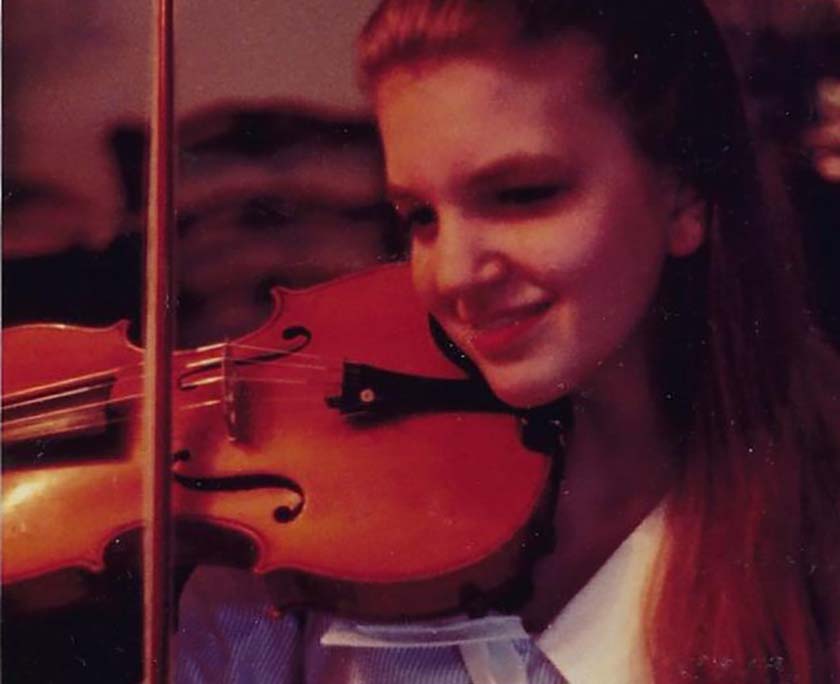 A recollection of strings....
E

very time I return to my father’s house in Iowa, I try to whittle down my childhood belongings. I’m down to a few boxes of papers and books, along with my beloved dollhouse — a keepsake for my daughter. In the corner of the closet with all my memorabilia is my first violin.

It was passed down from my Aunt Marilyn, who received it from her grandfather, who brought it to America from Ireland. Although it was really more of a “fiddle,” we doctored it into my starter violin when I started taking violin lessons at age eight. My father had suggested that I learn the cello, but I insisted on the violin. I later regretted this decision, once I stumbled upon the beautiful, sonorous Bach cello suites in my teens. But as a child, I could not be deterred from violin, the smallest and therefore most feminine — and difficult — of the string instruments.

I had two goals when I started: to learn to vibrate, and to be a serious enough player to have a hickey on my neck to show for it. Unlike a hickey from kissing, a violin hickey crusted over like a scab, giving one the hard-earned mark of a real violinist.

A violin hickey crusted over like a scab, giving one the hard-earned mark of a real violinist.

After years of practice, I reached both goals, although violin was always challenging. I loved it more than it loved me back. I had a couple of disappointments during high school. In tenth grade, I missed making the All-State Orchestra by one point. Our school orchestra was notorious for sending more players to All-State than any other orchestra in the state, and I remember the painful bus-ride home, trying to shrug off my failure while everyone around me celebrated.

But the next day, I was up practicing again. After all, violin had taught me to work hard, and humbly. Still, my failure marked me. At the end of that school year, I was not promoted to the big orchestra with the other top violinists in my class. The conductor instead made me concert mistress of the smaller orchestra. She needed a strong leader for it, she explained.

Unconvinced, I asked to meet with her privately to discuss her decision. This represented my first real questioning of authority, and the conductor, Miss Wiebener, whom we called “The Wieb,” was a formidable start. She instilled both perfection and fear. With her perfect pitch and razor-sharp focus, she would regularly call out anyone who was out of tune. But when I talked to her, I was on a mission. I wouldn’t leave until she admitted that she felt I wasn’t as advanced as my promoted peers. Satisfied, less with the answer than the truth, I complied with her wishes of being a strong leader, and led the small orchestra with gusto and dedication.

With her perfect pitch and razor-sharp focus, she would regularly call out anyone who was out of tune.

After that, however, my interest in the violin began to wane. By the time I made All-State Orchestra senior year, I was onto another love: journalism. I spent most of my free time in news lab, pulling all-nighters during production week, arriving bleary-eyed at orchestra practice the next morning — terrified that Miss Wiebener would call me out. She did so on a few occasions, and until a few years ago, I had a recurrent nightmare — like some people do of being naked in the street — of arriving to orchestra in the morning without my violin.

By the time I graduated, my love affair with violin was over, and I’ve picked it up only a half a dozen times since. But my appreciation of playing in orchestra has lasted my whole life — and has never really been duplicated. Orchestra anchored me to the collective experience of making music in the same way that group sports probably do for athletes. My orchestra friends are still among my closest friends. We shared some memorable experiences, like the summer we toured Europe, playing concerts in the public squares.

Even our ordinary practices and concerts could become extraordinary — like our last concert senior year. We were playing Dvorak’s New World Symphony, and even as I faked my way through some of the notes, I focused on turning the pages of the music on time so that my stand partner —who is now the Second Violin the Malaysian Philharmonic Orchestra — didn’t miss a beat. I caught the intense gaze of Miss Wiebener one last time — a gaze that taught me everything about the necessity of hard work to do anything well. Isn’t this beautiful? I thought, taking in the efforts of my peers, and the music itself. You will remember this.