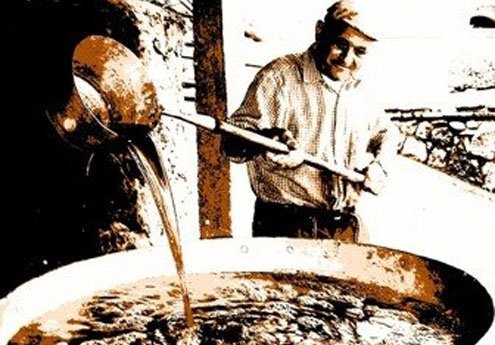 ith the start of autumn, people all over the world are making wine (thank goodness), and I’m willing to bet that at some point in the process all these wine-making communities will stage some kind of festival.

Ripe San Ginesio, the Marche hamlet near our home, is no exception. We’ll soon be attending I Fumi Cotti, which is a little like an English Village Fete if you substitute wine for tea. The ladies of the town decorate the houses and bake seemingly endless numbers of cakes while the men roast sweet corn and make the local specialty: Vino Cotto, yes Cooked Wine.

Ripe San Ginesio is very proud of this sweetish brew and its origin is fiercely contested with neighboring Loro Piceno, another nearby hamlet. But just why either one would want to claim it is a mystery to me, vile muck that it is.

At the same time, it’s so much more than just a wine.

The production process is very simple. A couple of toothless old gimmers break their backs bringing a huge press into the town and another two bring a huge cauldron. They set these up in a small piazza and then light a huge fire under the cauldron and as people bring their grapes the pressing begins. The mostra, or juice, is added to the cauldron and literally cooked.

While the smoke rises above the rooftops we sit with the gimmers and enjoy the first chestnuts roasted on the fire while they stir their cauldron and let children drink the juice from the press. It is at this moment that we consider ourselves fortunate indeed.

When the brew is sufficiently reduced it is bottled and left for at least 10 years before becoming drinkable — although whether it’s ever really drinkable is a matter of opinion.

The festival lasts for two days and represents a grand time. Bands play, good food is served, wine of all kinds is drunk, and absolutely everybody is involved. By the end of the weekend there’s enough Vino Cotto bottled to ensure a constant supply for years to come. Whatever my feelings about the wine itself, I’ve had had reason to be grateful for its existence.

There’s kind of communal keg of the stuff, which shows up at all social gatherings. We’re allowed to help ourselves. The keeper of the keg seems to change with each occasion, but the keg is omnipresent at funerals, weddings, parties and football matches. I even spotted it at the opening ceremony for the new school building.

But it can also be a bit of a lifesaver. In a previous life I was a nursery school teacher. In those days, I put on a number of fancy shows to give parents a chance to delight in their children. I also learned the rules of school productions: they can’t be too long (half-an-hour is perfect but 45 minutes is too long); you can start a little late, but only by 10 minutes; all the children must be included and foam grape costumes will inevitably make a choir speechless with laughter.

Italian teachers, sadly, haven’t yet managed to work any of this out. My heart sank when we got the invitation to the local Christmas show, which started at 9 p.m. At least that’s when it was due to start, but it was 10 p.m. before they got going, and it then went on for two hours. I had a six-month-old and a two-year-old, with the latter continuing to slap the bald head of the man sitting in front of us and unravel his wife’s knitting (she came prepared for the long haul).

So when the plumber produced the communal keg, I rejoiced. The last 30 minutes of the show seemed to me wonderful as a result. Funnily enough, cooked wine never tasted so good.