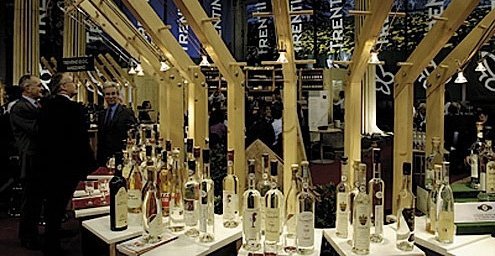 Facilities are as crowded as a shopping center before Christmas — especially on the wine fair’s weekend dates.
R

egular readers of my Pane al Vino column online know that I often comment on what I believe to be Italy’s embarrassment of riches when it comes to wine. Some years, France may produce a little more wine than Italy does in terms of volume, but no two countries combined can match Italy in terms of diversity: More than 1,000 different grape varieties are cultivated, spread over an estimated one million unique vineyards.

Wine is grown the whole length of Italy, from the remote southern island of Lampedusa — geographically part of Africa, not Europe — to the slopes of the Italian Alps in the north. One could spend years (I’m proof of that!) traveling to each wine-growing area to taste the local fare, much of which is only rarely available more than an hour’s drive from where it was produced.

But there’s a Cliffs Notes-like alternative to spending the next decade on the road: Vinitaly, the annual wine fair in Verona.

Each year around now, Verona — the center of the wine-growing area that produces intense and raisiny Amarone wines — transforms itself into the wine capital of all of Italy.

The fair started in 1967 with the name “Italian Wine Days” (the name “Vinitaly” was first used in 1971) that featured a couple dozen local producers who showed up to show off their best stuff and to see what their neighbors were bottling.

That inaugural meeting would fit into a corner of this year’s fair, the 40th edition of the event, which will feature more than 4,200 Italian and foreign companies and 80,000 square meters of floor space. That’s the size of a parking lot with spaces for almost 7,000 cars.

In addition to pavilions focusing on each Italian wine-producing region and almost 30 foreign wine regions, there will be exhibits on olive oil making, wine growing technologies, grappa and brandy, and classes on wine tasting.

Vasco Restello, Vinitaly’s events coordinator is working at his 29th Vinitaly this year. Today’s fair, he says, would have been all but unimaginable to those accustomed how the event looked in the late 1970s.

“It’s just so much bigger and more sophisticated than it was years ago,” he says. “We used to cater specifically to consumers; now distributors and buyers make up a big part of it. We used to focus on wines from northeastern Italy, and now all of Italy is here and there are some producers who come from all over the world.”

Of course, Vinitaly is not without its problems.

Facilities are as crowded as a shopping center before Christmas — especially on the wine fair’s weekend dates, when many locals pay entry fees and then seem set on recovering their investment in free tastings and other giveaways. The setting means that producers don’t always have the time or inclination to chat about their wines and winemaking theories the way they would if they were on home turf.

In order to offer 80,000 square meters, the Verona Fiere uses neat rows of tent-style pavilions the size of airplane hangers, with cheap artificial light, distracting acoustics, and warm temperatures that can make many wines taste bland, oxidized, alcoholic, or generally flawed. Like a lot of things in this part of the world, organization is adequate but not without room for improvement.

But the temptation of being able to taste a wine and discuss the state of the industry with someone from Italy’s Piedmont in the northwest corner of the country, and then take a short stroll to do the same from the southern island of Sicily is just too tempting to pass up. There’s no doubt that anyone who makes the pilgrimage will come away with a greater understanding of Italian wine and the culture that produces it.

If you decide to go to Verona, here are some steps to take to help balance some of the events’ weak points.

I always look for producers whose stands include temperature control units or are in cooler corners of the pavilions so that their wines are served closer to the right temperatures, for example.

And it’s surprising how a little knowledge of geography can contribute to any effort to avoid the crowds: Stay away from the best known producers from the main wine regions of Piedmont and Tuscany and look for small producers or — better yet — head for under appreciated regions like Basilicata, Le Marche, Lombardy, Molise, or Reggio-Calabria. You’re more likely to find out something unusual there anyway.