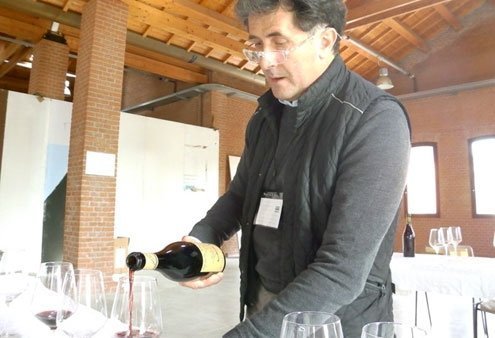 y favorite wines are “terroir” wines. They’re the ones that tell me most about place and people. Early in April I attended the 11th edition of Italy’s Vini Veri wine fair, dedicated to independent, “terroir” wine producers.

Understanding just what terroir means can be tricky. The French word itself signifies a sense of place, but “place” in the specific context of land, climate and the ingredients in earth — all of which influence grapes.

In addition to ViniVeri, a small, Italian organization, Nicholas Joly’s larger French-based Return to Terroir group was involved with the fair. Carrying the meaning of terroir a step further, they adhere to strict vineyard and cellar guidelines above and beyond the demands of organic or biodynamic certification. Their goal is to restore “a harmonious balance between man and the land.”

“If you want wine to have flavor and taste,” said Joly at the fair, “you need a different kind of agriculture.” Industrial agricultural production, he said, not only masks the impact of “terroir,” but also ruins the soil. Depleted soil in turn weakens plant life, making it more vulnerable to disease that then requires chemical treatments, which in turn further weakens the soil. It’s a vicious cycle.

ViniVeri and Return to Terroir have the stated goal of planting of native grapes and preserving local biodiversity. They want soil occupied naturally, by woods, pastures, fallow land, with fruit trees. When acres upon acres of land are stripped and planted for “monoculture” use — in this case, for grapes- efficiency certainly improves. But soul fertility diminishes. Pests and disease spread more easily. Natural aromas and flavors in the land around the vineyard are reduced.

Both organizations, along with the “natural wine” group, VinNatur, seek legislation calling for the listing of all wine ingredients (like food product labels, which wines lack). They argue consumers would be shocked to learn that many expensive, name brand wines are full of additives, including commercial yeasts (to speed up fermentation), enzymes, sugar, vitamins, flavors, and water. It’s a long list.

All of this sounds abstract until you start tasting the wines. That’s when the impact of natural terroir (land, climate, soil) and the vintner’s choices (grape variety planted, harvest timing, time on the skins, wood or steel or cement for fermenting) make a striking appearance.

Loris Follador’s 60-year-old vineyards, for example, are located on steep slopes in Valdobbiadene, between 200 and 450 meters up. But he chooses to make his Prosecco wine under the IGT and not the stricter DOCG or DOC classifications. The choice gives him the flexibility. He can leave the wine “on the lees” (in the bottle with spent yeast) without filtering it.

I first tasted Follador Casa Coste Piane Sur Lie Prosecco di Valdobbiadene IGT (€10-15) several years ago and loved the crisp minerality that comes from old vines whose roots run deep in limestone soil. This time, I also tried “cru” — Follador Casa Coste Piane “Le Brichet.” It’s even crisper, but without losing any of the interesting and delicate flavors. These wines can be enjoyed on their own or with just about any food.

Later on, I attended a full tasting of all of Stefano Bellotti’s nine Cascina degli Ulivi wines, which ranged from the light, white Semplicemente Bellotti Bianco Vino di Tavola 2008 (€10), 100 percent from Cortese (Gavi) grapes in steel vats, to the rich Mounbé Barbera Piemonte DOC 2005 (€25), a full-bodied red with plenty of tannins and a hint of spice (the wine is fermented and aged in wood barrels).

My favorite was Nibio Terre Bianche Dolcetto Monferrato DOC 2006 (€18), made from a 1,000-year-old version of Dolcetto, a native red grape. Bellotti describes it as “full, tannic, rich with aromas but velvety,” and I agree.

A final highlight was a vertical tasting of Giuseppe Quintarelli’s Amarone 1993, 2003 and 2008, led by Vini Veri President Gianpiero Bea (a vertical tasting involves different vintages from the same winery). Bea honored Quintarelli (1927-2012), whose simplicity, coherence, sensitivity to traditional methods and refusal to cut corners inspired a generation of quality vintners.

Also present was Giuseppe Rinaldi, who makes magnificently austere Barolo in Piemonte. No fan of Amarone (it “…can be sweet and jammmy,” he said), Rinaldi nonetheless praised Quintarelli for creating something special and outside the norm. Bea noted Quintarelli was able to maintain the wine’s “noble tannins” by not de-stemming, instead leaving the grapes to ferment with indigenous yeasts for long periods.

Each wine had its own special flair and flavor. But the 1993, we all agreed, was exceptional — bright, vivacious with fresh acidity, but harmonious, complex and full of richness (15 percent alcohol). A bottle runs about €550.