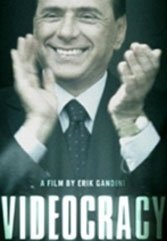 In love with Italy and its happy-go-lucky natives, good food, beautiful monuments and art? See “Videocracy.” And weep.

Produced by 32-year-old Erik Gandini, an Italian filmmaker who lives in Sweden, the documentary won top honors in its category at the Toronto Film Festival. How it fared in Italy is another matter. The film, which focuses on the country’s obsession with TV and Prime Minster Silvio Berlusconi’s power over the medium, came and went fast, with private and state-owned channels declining to show its trailers. That may have less to do with Berlusconi and more with Italians not having the stomach to see who Berlusconi’s supporters are and what they’re up to.

Some of the scenes are vulgar, perverse, others sad. Gandini melds images of Italian youth (the country’s future) with a short history of Berlusconi’s rise through the ranks of private television, one that coincides with the “adult” lives of the movie’s subjects. In the 1980s, Socialist Prime Minister Bettino Craxi, a Berlusconi friend, oversaw legislation that helped the “nationalization” of local channels heavy on sex and game-shows.

The message is less vitriolic than disheartening, and at times amateurish, which may explain why the seamy Mora and others let down their guard for Gandini. They probably doubted the movie would ever be made. Gandini says he felt the same way about Berlusconi’s amateurish local TV stations. He never dreamed they’d evolve into a social and political force. He says he hopes his low-budget effort can have the same potent effect.

Give him a hand: See it, and tell your friends.