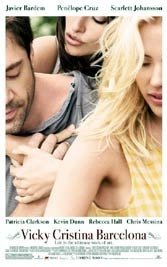 “Vicky, Cristina, Barcelona” is Woody Allen’s variation on a fun summer flick. You’d think from the poster that Penélope Cruz and Scarlett Johansson were the Vicky and Cristina of the title, but Rebecca Hall is Vicky and Scarlett Johansson is Cristina, two twenty-something girlfriends on a summer vacation in Barcelona. They live at a stupendous villa owned by the Nash family, friends of Vicky’s family. (Patricia Clarkson is strong as Judy Nash, a woman who has everything, including ennui).

Vicky is studying Catalan culture and is engaged to marry her stable, businesslike boyfriend; Cristina wants both fun and a sense of purpose. The girls meet magnetically-attractive Spanish painter Juan Antonio Gonzalo (Javier Bardem), who makes an earnest and indecent proposal: He’ll fly them privately to Oviedo for culture, good food and lovemaking. Cristina’s game, and Vicky unwillingly tags along.

When Cristina gets sick, Vicky finds herself alone with Juan Antonio and begins seeing him in a different light. Both girls are infatuated with the sexy Spaniard, whose tempestuous and unstable ex-wife (Penélope Cruz) then re-enters his artistic world, just as Vicky’s future husband re-enters hers.

Beautiful scenery, warm summer light, flowing summer clothes, billowing hair, and doubts about morality — right vs. desire — are the film’s centerpieces. Life isn’t a romance: It doesn’t tie up loose ends. Still, the movie’s mood makes you feel as though you’d just graduated from college, were open to the world’s arms and ready to take a summer vacation.

While the Spanish actors (Penélope Cruz and Javier Bardem) are alluring, their American and British counterparts are stiffer.