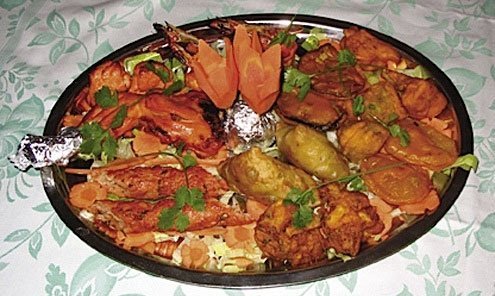 Indian cuisine has made significant inroads in Italy.
I

taly is not kind to ethnic food. Like France, it delights in the riches of its own cuisine, leaving foreign pretenders on the outside looking in. Chinese restaurants began opening in Italy three decades ago, but most still tend to adjust their cooking to garlic-tinged Italian tastes. Spice-heavy Indian cuisine, hugely popular in Britain, faces an even more daunting task, where startling flavors and uncommon mixtures are viewed with considerable skepticism.

But in three Italian cities, Rome, Milan and Bologna, Indian cuisine has still made significant inroads.

Suzanne Bush, who is British, and Kristine Crane, a U.S. citizen, went hunting for their favorite Indian dishes in Rome. For Suzanne, it was chicken korma, a creamy poultry dish rich in onion, ginger, coriander and yogurt. Kristine picked lamb rogan josh, a curry with tomatoes, cardamom, cinnamon, and cilantro.

Says Suzanne: “I know most hardened fans of Indian food will scoff at the idea of my picking chicken korma. It’s usually the mildest dish on the menu and in Britain you opt for chicken vindaloo if you want to impress. The fact is that every now and again I get a craving for it, and I’ve often been disappointed by the offerings of Indian restaurants in Italy. It’s not the quality (it had better be good given Italian prices) but the quantity that comes up short, particularly after eating Indian in Britain, where you often get enough for two meals. So casting aside previous disappointments we set out in search of new restaurants.”

Adds Kristine: “Ever since I took my Art of Living course on Indian breathing techniques I’ve discovered the virtues of things Indian, not least the diet. It’s great for vegetarians because it’s rich in legumes (like lentils) and all sorts of veggies. I’m not a real mutton fan, but following the commanding tastes of the masses, I opted for rogan josh, one of the most popular dishes on any Indian menu.”

— Suzanne Despite what looked like small portions, we felt as if we could roll home after dinner. Quantity was not a problem here, and the korma was very tasty too. Via dei Serpenti offers you a choice of Indian spots, including the nearby Maharajah, which some rate as Rome’s best (though I left hungry the time I went). Mother India offers you tables inside and out, making it ideal for summer and winter dining. Inside, ornate chairs add a flavor of India to otherwise plain surroundings. All in all, a good dinner.

— Kristine I love this place! It’s more down to earth than the Maharajah. Atmospherics aside, I ate best here. The vegetarian samosa for starters was excellent: the pastry was crispy, and not too oily, with a perfect blend of potatoes, carrots and peas folded inside. The lamb in the rogan josh was tender, with spices that were convincing but not overdone. All was accompanied by a wholesome but not heavy naan. In spring and summer, terrace dining has wonderful non-touristy views of the Colosseum.

— Suzanne Maybe it was because we are girls or maybe it was because we’d been caught in a torrential downpour moments before, but we got two welcome glasses of prosecco on the house. The restaurant is big, with a relaxed atmosphere helped by subdued lighting, and traditional Indian touches to the décor, such as colorful material adorning the walls. Overall, though, it has a modern feel.

The mint and yogurt dip for our papadums was a lurid green, but had a strong peppermint ice cream flavor to it, which I liked. The korma arrived just how I like it, with loads of sauce. That, too, was packed with flavor, very spicy and fruity. As I started to eat I decided it was possibly the best ever korma I had ever eaten, though by the end it had become a little too sweet even for my taste. I wasn’t too convinced by the chicken, I must admit, and would have been perfectly happy with just the sauce and rice.

— Kristine Too big for my taste — nice for a birthday party or something, but not ideal for a cozy evening. And the front room, though much smaller, is too heavily trafficked for a relaxing meal. The prosecco was a nice and needed touch, but I was disappointed with what followed: My rogan josh tasted like stew. Canned stew. It was too salty — perhaps to cover up for the spices they just didn’t get quite right. I suspect the samosa might have been frozen.

— Suzanne It started well, with free prosecco and papadums with a lovely minty dip and positively marmalade-like sweet mango chutney, but the watered down wine was a nasty shock. Then again, we weren’t really in a position to complain given that it only cost €3 for a half liter.

While Jaipur possibly got a little carried away with their flavors, here I experienced the opposite, with a worryingly pale korma that was little more than chicken and cream. To start, I thought it had a nice spiciness, but I soon realized the rice was the source. It was great: big, fluffy and white, with a few orange grains on top adding a nice touch, but the rice alone wasn’t enough to make up for a decent-sized but disappointingly flavorless korma. The décor was good, though, fresh white walls, with dark wood paneling around the bottom which was simple but striking in its overall effect.

— Kristine Quaint is the word that comes to mind here. But then, it is possible to be too quaint, or too forced, and I found the service here to be a bit too much: We had three different waiters, all of whom seemed to come one right after the other with our dishes — so quick that it made me think the food was pre-prepared. Though the flaming spicy dishes others in the restaurant got — brought out on the spot, while cooking — reassured me at least in part of the restaurant’s authenticity.

That said, the food seemed to be a cornucopia of things that left me wondering what they actually were: the samosa had caraway seeds and a bit of cheese. The tender and very spicy lamb redeemed the meal. The naan was colorful. The waiter insisted on bringing the specialty pistachio naan, which was stuffed not with pistachios, but peas…Too oily and not enough salt. There is one curiosity that I must point out here: This is perhaps the only bathroom in Italy with a full-length mirror, and not where I would have chosen to put it!

— Suzanne This has to be one of Italy’s more authentic Indian experiences. Here they like to make their food really spicy (don’t forget though, I’m a korma girl, so it is probably still only mildly spicy compared to how they really eat in India). This time we started out with a complimentary glass of rosé wine and a small papadum, surrounded by a reassuringly South Asian clientele. I loved the décor in this place. The bottom half of the walls are lined with maroon velvet adorned with colorful tassels, while the top half is a bright, sunny yellow, which made us completely forget the rain we’d walked through to get here.

Even the korma here was spicy enough to cut through the cold I was suffering, but don’t worry if you prefer things mild, they probably wouldn’t mind if you specify how you want it. This was definitely my favorite place. The service is respectful and unhurried in an environment good for a group meal or a romantic dinner for two. This is the authentic Indian experience, with decent portions that left me nicely sated. I’ll be coming back.

— Kristine This is the place to come in Italy’s most ethnic piazza, (my beloved) Piazza Vittorio: Having been here for their €5 lunch special before, I know this restaurant draws a primarily local crowd, including demanding Indian shop-keepers and vendors. The service was gracious, the ambience pleasant and sincere (the floating candles surrounded by real white flower petals were a sweet touch).

The papadum was thicker here than anywhere else (like a Ruffle potato chip rather than a Pringle), if the accompanying sauces were a bit too watery. Nice meat, tasty naan. The portions were adequate, if not generous, but don’t balk, breathe: Eat less and breathe better.

Founded in 1990, respected Sukrity is the oldest Indian-managed place in Milan and specializes in the classics of northern Indian cuisine: Chicken tikka masala, tandoori and a variety of naan. Waiters speak fluent English, and the menus are all bilingual. The atmosphere is warm and relatively intimate, with high ceilings and tables set up at arms’ length from one another.

The New Delhi is the most recent addition to the neighborhood. Several different prix fixe menus offer palak paneer, murgh tandoori and a range of curries.

All three restaurants offer take-away, though Sukrity doesn’t advertise the service and you’ll have to negotiate a 10 percent discount. They all offer lunch at a fraction of the dinner price.

— Samarkanda Next door to Taste of India, Samarkanda sells a range of Indian jewelry and objets d’art.

— Shahjalal On Via Lecco, just below the intersection with Via Castaldi, tiny Shajala has food home-delivery. Tel. 02.2951.0632.

— Harambé Saris, blouses, jewelry and handbags. Elegant merchandise is picked by the store’s owner and the prices reflect good craftsmanship. Its success has spurred expansion further up Via Tadino, where you’ll find La Via dell’Incenso, entirely dedicated to incense, and Tè & Spezie, specializing in international tea, spices, and gourmet chocolates. — by Aaron Maines

BOLOGNA: Four for the road

From the Calcutta rickshaw that greets you to the chai glasses, India strives for authenticity. Ingredients are fresh (from Delhi, via London and Milan) and waiters are polite and efficient. Kingfisher in hand, it’s comforting to watch the two Indian chefs prepare the meal.

Tandoor and murgh are the house specialties. Start with the lentil-based multani soup, a great antidote to winter nights. So you have an asbestos palate? Pick murgh vindaloo. If that makes you want to call the vigili del fuoco, go for the enticing sweet coconut barfi instead and finish it off with a ginger digestive reputed to have immune-enhancing qualities.

The warm atmosphere is slightly offset by the high ceiling, but what self-respecting Indian restaurant doesn’t need space for an enormous elephant effigy to recharge its karma.

This haunt near the university is populated by British students hankering for homeland flavors. It’s intimate, with a beautiful red brick ceiling (and an outside courtyard in summer). €10 buffet at lunch.

For curry purists. It’s conveniently located near Via del Pratello (one of Bologna’s favorite drinking spots.) But don’t overdo it on the papadums. — by Jon Clark