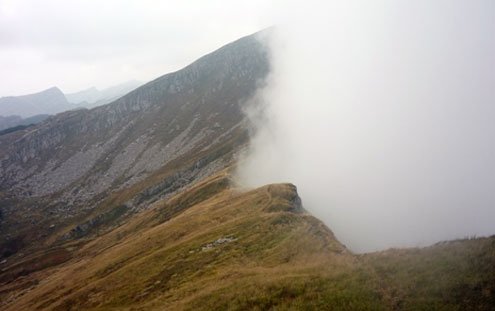 ushroom hunters gently poke canes under leaves, looking furtively about the woods to see if anyone’s watching. They pause as we pass and eye us suspiciously. A woman marches down the path. She wears a wicker rucksack with a green cloth lid strapped to her back. Mushroom hunters need permits and must use baskets, which allow spores to escape and proliferate. Poachers hide their spoils in plastic bags.

It’s the end of September and mushroom festival time at Rifugio Lagdei, a mountain restaurant and hospice in Parma province where my husband Marino and I are staying overnight. We’re in the Parco Nazionale Appennino Tosco-Emiliano. From Parma, we’ve driven to the towns of Berceto and Bosco and then along the “Via dei Porcini” (Porcini Mushroom Road) to Lagdei (1,250-meters).

We’re now on trail 723a, marked with red-and-white-striped Club Alpino Italiano (CAI) signs, which starts from Lagdei’s large parking lot. We’re heading to Lago Santo Parmense (1,507-meters), then up Monte Marmagna (1,852-meters) and along crests and peaks that straddle the border between Parma province in Emilia-Romagna and the mountainous Lunigiana area of Massa Carrara province in northwest Tuscany. It’s a medium-easy, 5-6 hour hike.

As we hike through fir woods and over rockslides, we glimpse more mushroom hunters prowling the forest floor. After 45-minutes, we reach limpid, glacier-carved Lago Santo Parmense, a surprisingly deep (22.5-meters) lake and the largest in the northern Apennine mountain range. Rifugio Mariotti, built in 1882 and one of the oldest hospices in Italy, nestles on its shore. Santo from Latin sanctus, means tranquil. But nowadays the voices of guests and fishermen rise above the squeaks of the chairlift from Lagdei to Rifugio Mariotti.

We walk around the lake, pick up path 723 and head for Sella Marmagna through woods of pine and beech. Soon the trees give way to open pasture and bilberry shrubs. Sella Marmagna, the saddle between Monte Aquilotto and Monte Marmagna, is straight above us. On top, our path merges with trail GEA 00, the Grande Escursione Appenninica, a 400-kilometer Apennine route.

We picnic on Monte Marmagna (1,852-meters). Here, the sunny north slopes of Emilia drop off abruptly into Tuscany. There are no sunflower-covered, rolling hills below. Instead, the forested foothills of the Apennines descend into the Magra river valley of Lunigiana which is flanked by the Apuane Alps and Ligurian Apennine coastal mountain ranges. Emilia, Tuscany and Liguria meet. On a clear day, the Cinque Terre, the Gulf of La Spezia and sometimes the peaks of Corsica are visible, but not today.

A wall of mist rises above the cliffs. It obscures the sun and shrouds the valley, mountains, and the town of Pontremoli below in a white veil. It is an eerie phenomenon. Mist from the Ligurian Sea hovers just over the crests, imprisoned by an invisible but impenetrable barrier of cooler air. The ancient goddess of Marmagna, Madre Magna or Great Mother, still protects her mountain. This meeting of air makes the products of Parma — including its Langhirano ham, Parmesan cheese and porcini mushrooms — so renowned.

Later, we walk along the crests on trail GEA 00 toward Sella Braiola (1,713-meters). Milestones mark the border. Dated 1828, they’re carved with the crown of the Duchy of Parma and incised with a simple “T” for the Grand Duchy of Tuscany. We climb Monte Braiola (1,819-meters) and continue to Boccetta dell’Orsaro (1,722-meters).

Clouds move in. We look up at Monte Orsaro hidden in dark swirls.

“Rain coming,” Marino says. We decide to return to Lagdei.

From Boccetta dell’Orsaro, we hike down path 729 towards Capanna Braiola, a hut for protection in foul weather. The fresh air and wild, open space give us a sense of freedom and well-being. We are in no-man’s land, a border between earth and sky.

Then the windswept slopes suddenly dip into calm pasture as Madre Magna enfolds us in her cloak. At a fork just past Capanna Braiola, we keep right on trail 729. We pass Lago Padre, a lake that’s now a bog. At Lago Santo Parmense, we pick up path 723 and follow it under the chairlift.

A light rain falls. A lone man on the chairlift above us shouts. “Any mushrooms?”

“Likely story!” He yells down.

Path 723 merges with trail 727. We go right. Near Lagdei, a troll-like mushroom hunter asks us what we’ve found.

“Nothing,” we say. He doesn’t believe us.

Tired from the long hike and 600-meter climb, we welcome dinner.

“Try the tagliatelle with porcini mushrooms, then boar stew and polenta,” an elderly woman from Parma at a neighboring table tells us. “I come here twice a year.”

We finish with spongata, a yummy, dark spicy fruitcake baked in a crust. It’s a traditional, Emilian Christmas treat.

The next day after breakfast, we explore an easy path. When we return, mushroom experts are setting out baskets of mushroom varieties on tables outside Rifugio Lagdei.

Marino points to some bright red mushrooms. “I’ll have one of those.”

Marino looks at another basket. “Chiodini. Did you find them around here?”

Among mushroom hunters, mum’s the word.

— To get there by car, take highway A1 from Milan to Parma, then highway A15 direction La Spezia to Berceto exit, follow signs for town of Bosco and for Parco Nazionale dell’Appennino Tosco-Emiliano, then signs to Lagdei.

Rifugio Lagdei Open summers and weekends, the rifugio (hospice and restaurant) is wheelchair accessible and has a flat educational trail. There’s a forest guard center and chairlift to Lago Santo Parmense, with cross-country skiing and snowshoeing in winter.

Rifugio Mariotti Also open summers and weekends, known for its pasta with sausage. No showers.