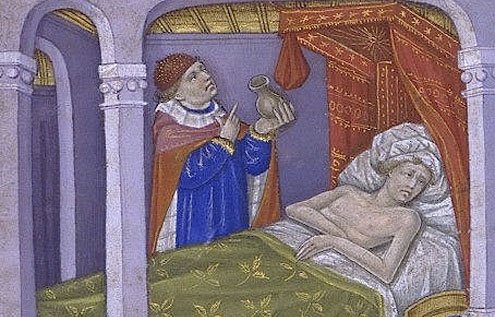 I glower and then shake my bag of medication, highlighting the fact that I could possibly be very ill and that this is no joking matter...
U

sually I would prefer to get any sort of medical attention in a country whose health system I have experience with. I would have waited until I returned to the United States, but as I was in Italy for eight months and started a series of vaccine shots just as I left Los Angeles, two of three shots had to be given in Italy. Forgive me for my lack of faith in the Italian health system, but recently a 40-year-old woman died in Florence because the ambulance did not think her case urgent enough to send a doctor. They sent the volunteer ambulance, which is senza medico (without a doctor). Perhaps they didn’t send a doctor because they were short on them, it being August, the Italian month of holiday.

Unfortunately by the time it came for my final shot, the English doctor I saw in Florence for my second shot was also on holiday. For two months. I wasn’t supposed to wait that long so I asked the main pharmacy if they could recommend someone who could prescribe it. They told me to go to the hospital by the Duomo, but that I first needed to order and reserve the medication by giving them a deposit. So I reserved the medication, went to the hospital, waited in line and got the prescription (after the doctor made me fill out the prescription form, as he had never heard of it before). I then returned to the pharmacy to pick it up and they told me it wouldn’t be there until the next day. “Ok,” I sighed.

The next day, I return to pick up the medication and then return to the hospital to have someone inject me (the previous day, I had confirmed with the doctor that I would be coming back for the injection, to which he responded with, “if you like,” as though I might prefer to inject myself!).

When I arrive at 10:15 a.m. the receptionist tells me that they only give injections until 10 a.m. and that I will have to wait until Monday. The medication is, of course, something that needs to be refrigerated and, of course, my fridge has a broken seal and is never at the constant temperature required for refrigerating medication. Hence, I need to get this shot now. I walk outside the hospital to the array of ambulances and interrupt the paramedics chatting to ask them if they can give me the shot. I have the prescription and medication with me, all I need is for someone to give it to me. No, they say they can’t. I return to the pharmacy to ask them where else I can go and they tell me and put my medication in a large foil bag to keep it cool, so now it looks like I’m transporting organs.

I head in the direction of the medical office and, as I don’t have a map on me, ask people along the way for directions. Pretty soon I’m walking around Piazza Santa Croce with a shop owner who is asking all the other shop owners along the piazza if they know Via dei Malcontenti. One shop owner offers that he only knows a Via dei Contenti. I glower at him and then shake my bag of medication in his face, highlighting the fact that I could possibly be very ill and that this is no joking matter. Finally someone recognizes the street name once I mention “un medico” (a doctor) and they tell me to keep going straight until I find a red cross at the back of a church.

The man who greets me is not the sort of person I was hoping to see at a doctor’s office: he is not as clean as I think he should be for someone in the medical profession. But then I find out he is not really a doctor and there is someone else in the office who apparently is. Anyhow the man, let’s call him Dirty Man, opens my package seemingly preparing it for the “doctor,” who I’ll call Injector because I immediately am not convinced he is a doctor either. Injector is very confused by the injection and is reading the instructions and looking increasingly perplexed. I’ll admit, the injection is a tiny bit more complicated than the average injection, but it does come with instructions… in his native Italian.

Finally Injector seems to have figured it out, although at this point I’m freaking out because no one has yet washed their hands, worn gloves or made any attempt at sanitation. In fact, Dirty Man became even dirtier when he unleashed two big wet sneezes into both hands and then wiped them together to dry them.

Injector walks towards me with the syringe while I ask“sei sicuro?” (are you sure?). By this time another man and a lady have entered the room and the man, who I’ll call the Reassurer says, “si, lui è molto bravo” (yes, he is very good). Dirty Man takes out a gallon container of pink liquid that looks like my nail polish remover, douses a cotton ball and hands it to Injector who wipes my upper arm (after asking if this is where the shot is supposed to go). I brace myself for the sting, but as soon as he places the syringe against my skin, he takes it away and looks at the instructions again. He umms and oohs for a bit longer then takes the cotton ball, which he has placed on the table next to his keys and paperwork, wipes my arm again and prepares himself. I feel a little bit of liquid brush against my skin as it drops to the floor and I immediately know what has happened. The syringe has been pressed down and the liquid lost to the tile below.

Everyone in the room has no idea what has happened. Injector has assembled the syringe in such a way that it could never be used correctly, but no one apart from me has noticed. This is when everyone in the room starts passing the syringe around, staring and tapping at it to figure out where the medicine went. They then ask me if I’m sure I didn’t feel the needle. I assure them that the needle has not touched my skin and I was not injected, but they prod and poke my arm anyhow, looking for the puncture mark. Then they come to the conclusion that “era vuoto” (it was empty) and pass the syringe around again, marveling at having received faulty medicine. Up until this point the only thing in my Italian life that has been vuoto is the brioche I order in the morning (without filling), but unfortunately this is now how they are describing my very expensive medication.

The woman grabs for the syringe and takes a look at it as she eats her rice cracker and then, having exhausted all her metal capacity trying to figure it out, hops up onto the doctor’s table for a little rest. In the meantime, Reassurer picks up the box and stares at it maybe hoping clarity will spring forth, but the only thing that does become obvious to him is the price printed on the outside of the box. He remarks that it is very expensive for a series of three shots. I tell them that price is for each shot. He remarks that is it very expensive for faulty medicine.

I ask Injector to call the pharmacy to tell them that he believes it was empty, as clearly it is empty now and I haven’t received the shot. I know it was Injector error, but I’m not going to be able to convince them it was and either way I’m not paying for a new one. So he calls the pharmacy and explains to three different people that it was a complicated shot, but that it was empty. When he gets off the phone I ask him for confirmation that the pharmacy believed his ridiculousness and he assures me they will replace it without charge. I return to the pharmacy and they greet me with a look of apology at having sent me to such a place. I hand them back the bag containing my dilapidated medication and when they look at the syringe they also understand that it was operator error, but will order another one for me without charge. I politely ask them to keep it in their fridge for the next month so that I can have the English doctor give it to me when he returns from vacation.

When I get home, I check my arm again to reassure myself enough to be able to sleep that night and go find my dictionary. It is as I suspected. Via dei Malcontenti means, “Street of the Malcontents.”