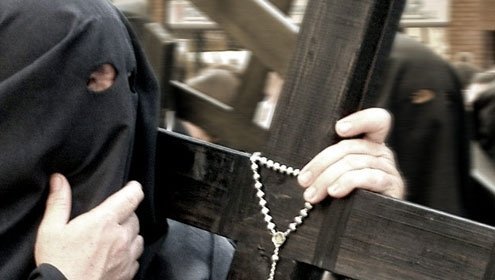 The emotions of the moment can send native sevillanos into a swoon.
T

he last time I visited Seville during Semana Santa, or Holy Week, I arrived on Palm Sunday. My stepfather Rafael is a native of the city and he and my mother make every effort to get there just before Easter. It was well past dark when my husband Simon and I finally located my family and Rafa’s family and their friends, big and mixed group of Americans and Spaniards. They were at a bar drinking Cruz Campo beer, eating tapas, and biding their time in the run-up to the religious parades.

Seville’s Holy Week processions, featuring pasos, or floats, are led by nazarenos — penitents — each clad in long cloaks, pointed hats and hoods that are oddly similar to the outfits worn by members of the white supremacist Klu Klux Klan (though the conical hats are really intended to reflect closeness to God and the cloaks a sign of self-effacement).

Behind the penitents comes a brass band and the paso itself, a large, wood-carved religious icon of Jesus or Mary. Each neighborhood’s hermandades and cofradías (religious brotherhoods) has its own procession and paso, carried from neighborhood churches by costaleros, literally sack men, who wear padding like a turban behind their necks and around their heads to cushion the heavy load (a paso can weigh a metric ton). Dozens of costaleros, most hidden by a thick curtain at the base of float, haul the paso to Seville’s cathedral, with the costaleros rotated several times along the route. Once there, they have to turn around and make the long return to their parishes, a round trip that can take more than half a day.

In Seville, a city where the Inquisition was a powerful force and hundreds burned publicly as heretics, pasos have been the focal point of Semana Santa for 500 years. Crowds gather at bars to talk and drink, spilling out into the streets and plazas as the paso nears. Voices suddenly grow hushed and all stare at the representations of suffering Jesus or weeping Mary. The high pitch of the trumpets builds on the emotion of the moment and can send native sevillanos into a swoon.

For me, the many pasos are strange day and nighttime apparitions. The dramatic sacredness of the moment gives me pause, even if I’m busy drinking a cold Manzanilla (a popular sherry both visitors and residents indulge in). Seville’s Semana Santa represents something of a balancing act. There’s rowdiness and zeal, crowd intensity and a sense of sacred air atomized by the allegorical processions.

On Holy Monday, Rafa’s family and friends gathered at the Miami Bar on Calle San Jacinto to watch the San Gonzalo Procession in the ancient Triana neighborhood. We drank, ate and talked as the crowd grew. The nazarenos shuffled past, some in bare feet. Soon came the whining sounds of trumpets in the distance. Then, eventually, came the paso: Jesus before Caiaphas, his hands tied and splayed before him. Rapt faces stared at the passing figures; the white plume of the Roman soldier swayed with the steps of the costaleros and the trumpets played at an excruciatingly solemn pitch. When the float moved directly before us, all turned silent. Once it passed, conversations picked up again and the crowd shifted away. Still drinking, we found ourselves on an empty street.

Rafael’s nephew, Abraham, a Seville native, rolled a joint for the group. Smoking it might not have been the best idea, but it felt like a fitting end to the daylong revelry. It was Abraham who guided us back to the center to reunite with my mother and Rafa, who had smartly departed with the crowds for a siesta.

As we made our way downtown, the whole city seemed to converge on the culmination of the rite, which comes before the various pasos enter the cathedral. We saw no way across teeming Avenida de la Constitucion. But Abraham wouldn’t be denied. He plunged us directly into flow of the nazarenos who were coming directly at us. Maybe too stunned, too stoned and too drunk, we just followed him.

In an even more brazen mix of the sacred and profane, Abraham lit the rest of his joint on the flame of a nazareno‘s candle. He continued walking quickly against the tide of the procession, still smoking, the four of us behind him. Crowds were pushed against the railings on both sides of the road and the nazarenos began trying and block our progress with their large, flaming candles. Red wax dripped on Simon’s shoulder. We finally ducked out and were separated, lost in the crowd.

We later told my mother and Rafael about our crazy adventure. They laughed and shook their heads disapprovingly at Abraham. An American visitor, also part of our group, spat at him, saying he’d desecrated the holy procession. Abraham insisted the procession had been in the way. He suddenly seemed to me to embody the delicate straddling act that makes Seville’s Semana Santa both an immensely important religious event and a great party.