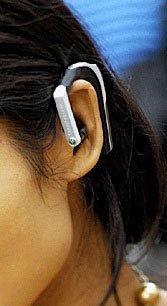 She drops me off, smiling. “You should try…” But no… Her palms fly up. Incoming.
H

ow’s your energy? I’ve flown 5,000 miles to face that question in those words.

Over Iceland, Newfoundland, and Labrador I’ve stared dumbly at a pixilated tapeworm on an oceanic display and now my cheery American host peppers me with pop physics intended to get to the instant heart of something. But what?

Do I feel in the moment?

How are things in Europe?

Am I OK with my life?

Bluetooth transforms her small left ear into a blue running light. She talks to me animatedly, then waves me off (incoming call), pushing the SUV into a highway gorged with replicates, a landscape of rolling conversations and gesticulation (women with children mostly). I see heads lifted and lurched to keep small phones from gravity’s cleavage.

In America like Italy, I observe, banter is on the road.

I scribble it down: “The Latinizing of America.” And for emphasis: “Gossip’s global trickle-down (pimped by wireless) does away with discretion and ensures everyone fits in…”

Harebrained observations suit me. My Nokia cell-phone was built in 1998 and can’t tell Verizon from Babylon. It’s my quaint amulet. People feel sorry for me.

But my chauffeur is enterprising. She chats, makes appointments, all while petting a manageably drooling dog named Mumbles. And she’s not alone. She’s a multiple multitasker (what, I wonder, befell the word “many”?) She designs house and office interiors, puts style into rows of cubicles. Before that, she decorated shopping malls (this while fighting and winning a child custody dispute). She drops me off, smiling. “You should try…” But no… Her palms fly up. Incoming. I smile and close the door.

Next day I receive an email with images of fancy urinals, most shaped like lilies, daffodils, and cherub laps. “Wherever you direct your bodily functions should also be fortuitous,” she writes.

And why not? Fortuitous is the new fortunate. Exactness and subtlety are AWOL.

If once you felt unwell and excused yourself to privacy, now you barf or hurl. No shame in that. Babies do it. And babies rule. So do victims. A penis isn’t just a penis; it’s also a potentially injured party. There’s performance anxiety and ED. Organs grow chronically depressed. Some are badly managed. Make a mess of a moving vagina and you have an ex-wife, or many. Given a chance (and a feverish penis), a man yields only to his inner jerk. Reproductive sexuality — offspring as accomplishment — banishes romantic skeptics as idiots or threats to the species, or both. The “children are to be seen, not heard” line might have been Hitler’s. Or a terrorist confection. Pets meanwhile, are merely genetically modified children. Vegetables and purified water have feelings, or should.

A culture is most circus-like when it can’t do without sentimental exaggeration — after all, American “yellow journalism” arose from the dual seductions of (then-new) industrial omnipotence and consumer uptake. So did celebrity fervor. (Donald Trump and Paris Hilton had their 1905 equivalents.)

More unsettling is the way dispassion bows before hysteria, the daily kowtowing to an awesomely constructed web of menace and theatrics. This is total democracy’s unbridled energy, its uncritically rampant feelings (and mess with those foibles and you’re a follower of enlightened censorship).

But housetrained frenzy is still frenzy. And there’s lots around.

At home, on what’s called the “world” news, a rueful anchorman stands over a collapsed Midwestern bridge bemoaning “the threat posed by America’s tenuous overpasses.” A weeping woman explains that disaster saps her energy. “You don’t know what not to be scared of any more.” She says she will no longer trust bridges. “The infrastructure of trust,” the anchor concludes, “is the latest casualty.”

Until stocks plunge a week later. The “collapse” — the word remains hot — is apparently the fault of the inflated sub-prime marker, which sounds vaguely like yet another organ or a cut of beef but actually represents bad loans. “Trust in the housing market,” the anchor now says, “is the latest casualty.”

Comedians skewer this crude yawp to make fodder for Youtube’s vast cannon. Yet wit is sufficiently decentralized and institutionalized propaganda so adroit at self-parody that eccentricity (and Blog-centricity) unknowingly joins what it seeks to lampoon. Subversion is a subsidiary of own company.

At best, America is very, very cool — or wants to be. At worst it’s a coddled hemophiliac charging ahead at its own peril. Democracies bleed, it boasts. And bleeding is its own hefty proof of life.

Until, unfortuitously, you faint.