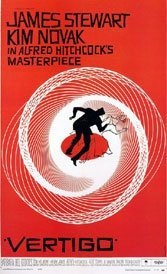 Misdirection was both Hitchcock’s strong suit and a central gambit in his cinematic chess. Here it starts with brilliant casting. The usually sturdy, placid and reassuring Henry Fonda is transformed into Scottie Ferguson, a retired San Francisco detective who’s afraid of heights and falls — figuratively and perhaps literally — for his the object of an improbable search, the beautiful Madeleine (Kim Novak), who may be suicidal. Or conniving. Or both. Madeleine is an old friend’s wife, so Scottie shouldn’t be feeling what he’s feeling, nor should he be climbing toward the unstable ledges from which his siren song character draws her dramatic oxygen. But that’s Hitchcock’s point: When the smitten try to save the mad, the line between the two states blurs. The result is a landmark psychological horror story about male obsession, in which a “perfect” out-of-reach real woman yields to a double-identity character built imperfectly from a troubled man’s unfulfilled dreams.

Fonda’s Scottie is appropriately intense, gradually unhinged, and finally panicked. He’s after the cursed ghost of Christmas past, and destined to look for her from one life into the next, unable to relinquish the idea of endings. Classic blonde Novak is suitably pretty poison, an unhappy walking ghost in two guises who speaks little, except at perdition’s gates (“Oh Scottie. I’m not mad. I’m not mad. I don’t want to die. There’s someone within me and she says I must die.”) Barbara Bel Geddes as Scottie’s former fiancé and confidant Midge is a splendid counterpoint to otherwise piercing abnormality. San Francisco of the 1950s, eclectic, pretty and enticingly squalid, is a character by itself. Followed, remarkably, by “North by Northwest” (1959), “Psycho” (1960) and “The Birds” (1963), an enviable run of four straight masterpieces.