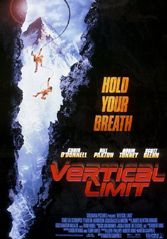 Hackneyed for much of its length, director Martin Bennett still gives the perils of mountaineering some memorable images. Peter Garrett (Chris O’Connell) is a photographer whose professional climber sister Annie (Robin Tunney) finds herself trapped on the slopes of K2 with a storm rumbling in. She and two others, including arrogant tycoon Elliott Vaughn (Bill Paxton), find themselves in a crevice after ignoring advice not to climb. Naturally, Garrett puts together a rescue team.

The movie has plenty of B-movie tripe (the rescuers include a medic played effectively but improbably by the beautiful Izabella Scorupco, a former Bond girl). The movie escapes irrelevance only thanks to a slow-to-develop relationship between Garrett and reclusive climber Montgomery Wick (Scott Glenn), who grudgingly participates in the rescue and gives it the sort of cranky ethics you associate with nick-of-time filmmaking (“Watch out for the nitro!”). Yet it’s the snowy peaks (most are in New Zealand) that star, with Bennett’s brawny direction a precursor to sharper work on “Casino Royale.”