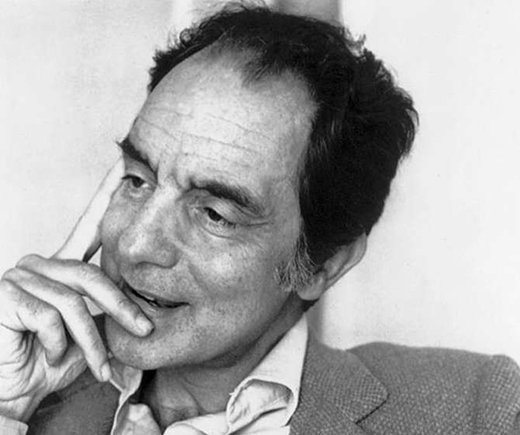 "I have a difficult time speaking precisely," said Calvino.
W

hat a shy man. We sat like perfunctory diplomats on the veranda of his Adriatic seafront home. He had writer’s block, he said finally, and the impediment chipped away at his speech. It would make him less interesting than usual, which of course wasn’t interesting at all. He was a bad conversationalist. He was inadequate in public. And so on.

This is how it began with Italo Calvino in 1977. Not false modesty but accomplished self-effacement.

Did he even like writing? I asked. Not really, he replied.

What came from his pen “were trickling worms of ink” for which he felt a “physical disgust.”

He wrote all his novels by hand (“I make too many mistakes on the typewriter.”)

Laid out on the roundtable of a cluttered upstairs studio were seven manuscripts, each neatly spaced beside another, some taller than others. Depending on his mood, he could contribute to one or more, or ignore them all.

“They presuppose seven different authors, and the range is enormous,” he said. “They vary from autobiography to pure fantasy.”

Imagining the Cuban-born Calvino in cyberspace is difficult. Self-promotion is P.T. Barnum territory — fecund topsoil for guffawing eyes and ears.

On some days Calvino didn’t even enter his studio. He was at once a monk, a medium, a transcriber of Gamma Rays. His virtue served originality. He inspected thoughts before words and words before sentences. The anti-casualness of the task tired him. It was neither instant nor especially gratifying. Nor was he a funnyman who could mount a defense in gags.

What he most feared, he said, was dying of a brain hemorrhage like his botanist father. Both his parents were botanists. Tales of family tragedy nourished our daylong conversation. Awareness of mortality is self-effacement’s only vanity.

“I refuse any and all illusions while trying at the same time not to get lost in what I consider a dark universe,” he told me at one point. “Only the strongest pessimism can afford some sort of optimism.”

His self-deprecation — “intellectual depression” for him — firmed up outsider credentials he insisted on despite his international fame. “I don’t have any particular intrinsic gift for writing,” he insisted. “It’s a matter of hard work and insistence.”

Passage to the Internet is seamless for some authors. A gossip of words produces more, then more still, and the gathering heft is widely circulated and shamelessly promoted. Participating in the rigging of the world into a pretend-connected stitch — the Columbus navigation of post-modern age — identifies a writer as part of some enervated global accomplishment, perhaps essential but certainly non-private.

Calvino wouldn’t have fit into the “fantastically speedy, widespread media,” as he called it before his death. Media that despite its variety configures communication “into a single, homogeneous surface.”

Instead, he suffered the diffidence that separates visionaries from enthusiasts. Gifts are not gifts to burdened bearers.

“I have a difficult time speaking precisely,” said Calvino. His writing relieved verbal imprecision and hinged on “diverting reality slightly,” fitting fantasies to words. “The world is so complicated, tangled, and overloaded,” he once wrote, “that to see into it with any clarity you must prune and prune.”

The great and vain Argentine Jorge Luis Borges pruned in the same way, but lacking in demureness. “Sometimes,” whispered Calvino, “I ask myself if it wouldn’t have been better to use a pseudonym for every book I’ve ever published. This runs against the grain of fame and publicity, but it would have given me enormous freedom.”

So, Calvino on the Web?

Would he have created domains of words under a myriad of assumed IDs? Would he have reveled in posting virtual chapters? Not likely. He was too busy subtracting from himself.

A writer’s benchmark, he insisted, was escaping the parochialism “of his country, of society, of all mankind. He must expand his vision and, if possible, see things moving on this earth as they might be seen from another galaxy.”

Eight years later after I first met him, just as I sought to refresh my interview, Calvino suffered a cerebral hemorrhage. He died in Siena.