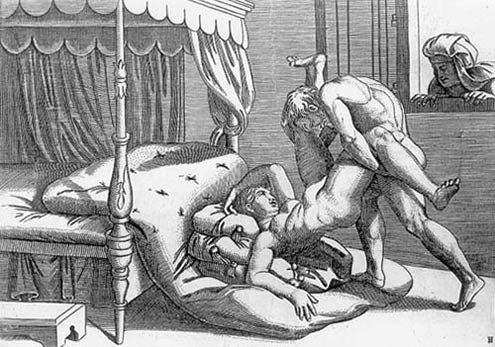 he obsession with classical antiquity during the Renaissance gave artists endless reasons to paint and chisel mythological figures in the buff. Astride this proliferation of garmentless gods and goddesses, highly eroticized paintings of saints and biblical scenes began to appear.

Giulio Romano and Marcantonio Raimondi met in Rome, where High Renaissance darling Raphael personally trained each one. Raphael’s sudden death in 1520 left star pupil Romano in charge of Raphael’s vast artists’ studio, which at the time was weighed down with completing the elaborate frescoes in the Raphael Rooms at the Vatican.

Raimondi, an engraver with a reputation for making impeccable copies of existing works, had wowed Raphael with an engraving inspired by his print of “Lucretia.” Raphael took Raimondi under his wing, eventually opening an engraving school for him to run.

Romano, also an architect, quit the studio in 1524 to begin working in Mantua on his fresco and architecture opus, Palazzo Te, the extraordinary digs of the city’s ruling Gonzaga family. Before departing, Romano left Raimondi with some of his erotic designs for the palazzo, drawings inspired by the coital images on ancient Roman brothel tokens. Using Romano’s designs, Raimondi created the “I Modi” (literally, “The Ways,” but known as “The Sixteen Pleasures”), 16 scenes of mythological couples in graphic lovemaking positions. The greatest invention of the Renaissance, the printing press, made possible Raimondi’s next move: He printed “I Modi “for public sale and consumption.

Pope Clement VII was incensed. He had Raimondi imprisoned, and ordered the images hunted down, banned, and the plates and prints destroyed. (Only nine fragments of the engravings — naughty bits removed — survive in the British Museum, although a copy of the “I Modi,” attributed to the 16th century engraver Agostino Caracci, appeared shortly after the original was banned).

It’s unclear whether Romano, knee-deep in frescoing lusty scenes in a private palace, was in cahoots. Church history portrays him as the innocent victim of a copyist, though it is likely that his close friendship with Clement VII might have gotten him off the hook. Romano, however, was ignorant of Raimondi’s imprisonment until he got a visit in Mantua from Pietro Aretino, the ribald Samaritan who bailed Raimondi out.

Aretino was also connected to Raphael’s circle, having once shared wealthy banker Agostino Chigi as a patron. A cutting satirist, polemicist and author, Aretino moved in the papal courts of Leo X and Clement VII where, as a sort of fringe literati, he trawled for political and social gossip to help fuel his scurrilous pasquinades, plays and lampoons. When Aretino got wind of the “I Modi,” he penned “I Sonnetti Lussoriosi” (“The Lust Sonnets”), 16 sexually explicit sonnets to accompany a second printing of Raimondi’s images. The book, which came to be known as “Aretino’s Postures,” marks the first time in history that images of sex and text appear side-by-side.

Yet despite the Church’s harsh censorship, the “Postures” remained a venerable and sought-after artifact, enduring for three centuries as the prototype for erotica in western culture.