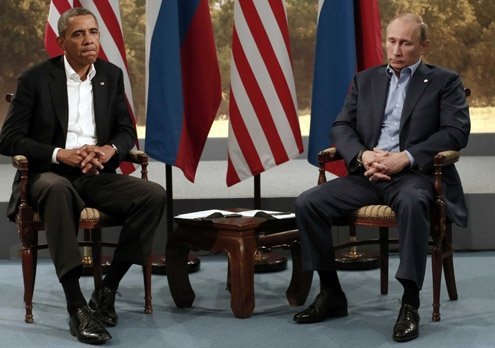 o two major power leaders, the merits and demerits of their respective political systems aside, are as different as Barack Obama and Vladimir Putin. Obama is ambitious, serious, even vaguely fatalistic, a highly educated political technocrat reluctant to flatter himself in public and schooled in the respectful, almost prudish side of American democracy.

Pocket-tyrant Putin is equally ambitious, often playful, and arrogantly self-involved, an easily offended macho-styled autocrat who knows how to manipulate Soviet-era legacies to serve his own ends.

Neither has ever much liked the other while both have played a seven-year game of post-Cold War dodge ball (Putin serving as the de facto Russian president despite the Dmitri Medvedev place-holding inter-regnum).

Vain and fussy, demanding of deference and big gestures, Putin struggles to understand American humility, which the well-spoken Obama embodies more than his folksier, war-mongering predecessors. Putin is an action man whose ability to act is limited. He was, for example, an admirer of the outlaw raid that killed Osama bin Laden — a raw chess move of the kind he would have presided over gladly. But Russia, outside Russia, no longer has outsized Soviet bluster, let alone real sway. In foreign policy, Putin must make do with his influence in Syria while trying to push resource-rich former republics to side with him and not China. He western interests are now second to his eastern gamesmanship.

Obama, in turn, seems almost allergic to foreign policy — at least as a personal investment. He’s a man who won a Nobel Peace Prize before the fact and, once fully presidential, failed to impress a Europe ready-and-willing to adore him. His personal charm and loquaciousness, race-driven in 2008, failed to translate globally, in part because he has an academic, almost provincial side that limits his imprint among bullies who consider the leaders of American democracy uninteresting unless they enjoy playing high-stakes games. Richard Nixon and Ronald Reagan both played good poker.

Poker isn’t Obama’s sport. His game at home, basketball, is closer to boxing on the world stage: he counter-punches and jabs with world-class grace. But he rarely takes the initiative. Instead, he’s patient, as is Putin, though the Russian wishes he wasn’t compelled to play by post-Communist rules he openly dislike. He rues olden times and makes space for their kindling at home. He wants people to “play” with and, so far, Obama hasn’t obliged.

Even the upcoming summit between the two leaders seemed of minimal import — again, there’s little to agree on — until whistleblower Edward Snowden entered the picture. His Moscow camp-out gave Putin a chance to ruffle the dormant Russo-American sandbox. Suddenly, Putin had someone the U.S. wanted, badly, triggering spy-age negotiation. A Snowden, had he snowed Russia, would have been captured and canceled from the map. But his antics embarrassed Washington, not Moscow. Putin had a rook with the potential to become a bishop, if he played the board in old-school style, not easy in a new world.

Putin had two choices: give up Snowden and appear weak, and institutionally obliging — cooperative roles he abhors unless he’s manipulate their outcome — or grant him rogue’s harbor in a storm, thus enraging Obama and naturally killing any chance at an (already compromised) summit.

That Putin bet on Snowden, Soviet-style, is no surprise. It’s an aggressively rankling move directed at a counterpart nation it envies and often pretends to dislike as a result, and one with which it has always had mixed relations. Domestically, the Snowden Gambit it plays to Putin’s macho humanitarianism, both of which are Moscow Madison Avenue fictions, and embellishes the risky, gesture-based opportunism that now-limited Russian foreign policy has come to represent. In his region, which includes Europe, Iran, China, and the Asian subcontinent, it’s a chump change reminder that Putin isn’t a lackey and capable of inflicting razor cuts on superior adversaries when possible. On a more personal level ex-KGB chief Putin sees Snowden as a defector (or an operative) who should be rewarded for what is perceived as, but is not, anti-Americanism.

None of this of course makes much sense to rule-of-law Obama, who finds these kinds of small-time Olympic contests both tiresome and repellant. To which Putin responds, implicitly, that the U.S. followed no rule of law in taking out Bin Laden. Instead, it saw through an imperative. It did what it believed it had to do, critics be damned.

That the Putin-Obama summit has been undone by the Snowden asylum bid is technically accurate. But what runs deeper is the divide between two men, whose worldviews are conditioned by their vastly different characters, making Obama from Venus and Putin from Mars.