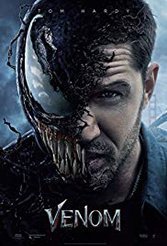 Who needs Kafka, cockroaches and metaphors when you can be in the company of Tom Hardy, aka Eddie Brock, and his considerably more ominous alter ego, a rather scaly creature that goes by the name Venom, an alien “symbiote” that’s hitched a human ride courtesy of some sinister bioengineering trials.

Multiple Personality Disorder, let alone existential trauma, doesn’t usually come with ooze and kinetic skin, and director Ruben Fleischer ensures Eddie has no doubt about his wacky extraterrestrial hijacking. (“I have a parasite,” he insists haplessly).

Who’s Eddie? Basically a righteous investigative journalist who more or less watches his life fall apart over the course of a day, leaving him almost no choice but to entertain his (famished) inner Venom, which has more-than-your-average-parasite ambitions: “Eyes! Lungs! Pancreas! So many snacks, so little time!” For movie purposes, this serves as the comic-terror equivalent of joining an off-the-books version of the Navy — since Eddie “contracted” Venom by wanting to know too much about the experiment-happy Life Foundation. Upgrading to part-time monster status relieves you of most quotidian headaches and allows you to see a more succulent side of the world, if not make plans to devour it. When Eddie is toothy Venom he gets to be in San Francisco and fight enemies galore, another riff on the doppelganger-avatar theme common to both paper comics and gaming narratives.

The charm here is the relationship — call it that — between Eddie and Venom, which Hardy, when not drooling, squares up with just the right amount of snappy banter.

There’s also lawyer Anne (Michelle Williams), Eddie ex-fiancée, but once you’ve been dumped and made yourself available to alien possession there’s just not much time for kissing, let alone making up. Instead, even Anne gets in on Venom’s “fun.”

All in all, Fleischer has concocted an eccentric fantasy that draws from both superhero and UFO themes (thank you Marvel Comics), while borrowing wisecrack timing from vaudeville (thank Hardy).

Some have compared “Venom” to the 1981 comedy “Stripes,” in which a smart-ass cabbie (Bill Murray) decides he’s done with humans and joins the Army, wreaking comedic havoc. But despite his goofy gifts, Murray had no ooze to spare. Hardy remedies that.