Vendetta in the rearview mirror 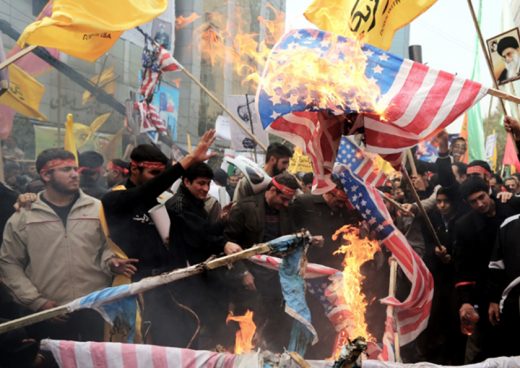 In November 1979, Tehran crowds charged the U.S. Embassy, triggering a 444-day ordeal for the 52 diplomats and American citizens trapped inside.
W

Iran released provocative images of the hostages in an effort to goad the U.S. into a settlement.

There was no single guiding motivation for Iran’s chaotic challenge and the intransigence that followed. In part, its new leader, Ruhollah Khomeini, a high priest of Islam who had just returned from a long exile in France, saw the stalemate as a means to make his presence felt, both regionally and internationally (just as another one-time exile, London-based Osama bin Laden, worked over time to concoct a similar attention-getting scheme).

But best to set aside any dissection of the crisis for another time. What matters here is that the United States, and its Democratic president, Jimmy Carter, lost control of the situation and soon found itself bogged down in what would become a year of futile negotiation, as a result losing hard-acquired “can-do” prestige.

As neophyte Carter puzzled over the solution, rejecting calls for confrontation, the Soviet Union used the distraction to push new medium-range missiles into Eastern Europe, making Washington look all the more like everyone’s geopolitical fool. The Cold War thaw known as détente fell away as Moscow invaded Afghanistan (a move it would later regret) in open defiance of a Georgia governor-turned-president who often seemed in over his head.

Among domestic critics, Carter also had botched U.S. interests in the Americas and all but invited Communist insurgency. To these detractors, he seemed devotedly preoccupied with making human rights into a policy-making priority. The emphasis struck some as inappropriate, if not a fool’s errand, at a time when the rights most at risk were those of Americans — witness Iran — with U.S. supremacy undercut as a result.

A country in dire need of commerce and friends doesn’t spike its own punch, nor does it build nuclear weapons in the sly.

There is no overstating the embarrassment the Carter years elicited among those schooled in confrontation. Even an eleventh-hour military rescue effort staged by Special Forces commandoes went horribly amiss in the Iran desert, adding insult to injury. In the end, the hostages were released on the day conservative Republican Ronald Reagan took office, with one-term-Carter by then appearing as if he’d aged two decades in four years.

Watching these events play out helped shape the world views of Bannon, Bolton and Trump, who chafed at Iran’s trifling with American primacy. The trio was joined in their outlook by George W. Bush era vice president and strategist Dick Cheney, who would later play a pivotal role in America’s self-styled resurrection.

Turning to more recent events, the ongoing effort to savage all of the diplomatic progress made under former President Barack Obama (and first- term secretary of state, the “criminal” Hilary Clinton) appear to stem —whether directly or subliminally — from pent-up animosity brought to a fever pitch during the hostage crisis — as if Iran should now be made to settle an unpaid bill that, due to Carter’s tolerance, was never presented. That Iran predominantly emasculated the United States 40 years ago doesn’t matter. Nationalism’s creditors keep records.

Trump, now president, has already voided the Obama-era nuclear deal while reviving a raft of sanctions intended to again ban Iran from mainstream Western interaction, canceling a decade worth of international reinstatement efforts. Iran’s hardliners, who for a while had less of a West-hating leg to stand on, have had their old poison replenished, essentially resetting the clock to 1980.

President Jimmy Carter, right, and his Polish-born National Security adviser Zbigniew Brzezinski seemed powerless during the crisis, provoking harsh criticism and a sense the White House was allowing the U.S. to be humiliated.

The answer to all these queries is no.

While never a loving partner to the West, Iran did at least appear to be playing by the rules agreed to under the Obama deal, the one its leadership reluctantly accepted to be freed from the yoke of sanctions and their economic paralysis. During the talks leading up to the deal, Iran generated little North Korea-like posturing. A country in dire need of commerce and friends doesn’t spike its own punch, nor does it build nuclear weapons on the sly.

No, what has befallen Iran is the result of rhetoric engineered by once-minor figures who have since become more powerful, each one possessed by percussively vengeful memories and inclined to give slogans such as “America First” a resolutely retroactive — if not biblically stern— dimension, as in “Let no sins go unpunished.”

Stripped naked, this presidency’s war of words and deeds against Tehran was set in motion by the events of another era. It is foreign policy as redress, once a medieval conceit. No forward thinking, aside from Trump keeping 2016 campaign promises, shapes its formulation.

Timeless ideologue Bannon, the ousted insider whose proud xenophobia still resonates, was a Navy man during the late 1970s and found much about Carter’s world view (a former submariner) distateful. Bolton, a Cheney favorite (he was briefly UN ambassador) and regime-change zealot who is now Trump’s one-man foreign policy guru, regarded Carter as an earnest but misguided appeaser who understood nothing of the world’s dismally seedy side, it slums awash iwith potential America-haters.

Trump, a New York real estate developer in 1979, disliked leaders who lacked “balls,” which Carter successor Ronald Reagan — though no George C. Scott in “Patton” — possessed in sufficient quantity to calm him and other Carter-harriers for a time.

All three men are between 65 and 75 and where in their “alpha” prime when Iran toyed with the hostages.

Obama, who came much later, revived bad memories. He salted his elders’ wounded pride by sounding more mournful than outraged in the face of international threats. He also appeared out of touch with events that predated the Setptember 11, 2001 terrorist attacks and the ensuring “War on Terror,” which stopped short of making Iran into a battlefield. The hostage generation would have to wait to make its payback leap, and it did. It now has the floor, with new recruits swelling the ranks of old school gunboat nationalism..

Call them fixers or rectifiers, they’re 2.0 Rambos eager to make a nostalgic action film. With Iran, it’s very much back to the future, as if “Nuke the Ayatollah” still had standing as a slogan.

More’s the pity for those who’d hoped a less menacing approach might help moderates slacken Iran’s leaden Islamic leash. Instead, those moderates now face jail for having been too kind to America. When a great nation decides it has scores to settle, everyone is bound to suffer, with the 94-year-old Carter still alive to see the damage done.