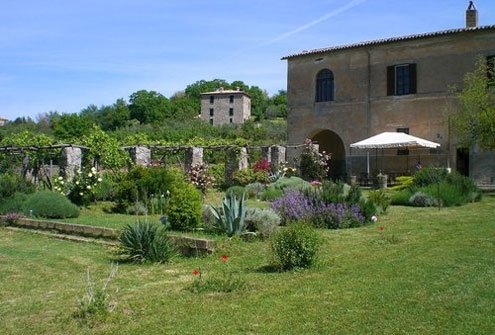 Convento Santa Maria del Giglio: Beyond the gardens, grapes.
I

talian has certain words that just don’t exist in English. Some are minutely detailed, as if to draw attention to their importance in national culture. One such word is vendemmia, which means the grape harvest. Not just the harvest of any grapes, but specifically the harvest of those grapes that go into winemaking.

Vendemmia can function as a noun or a verb, making it a versatile and seasonable addition to my reluctant Italian vocabulary. Since to experience is to learn, I admit picked I it up on the job. Last weekend I went harvesting.

We rose early on a Saturday, when sun hadn’t yet burned off the mist covering the hillier sections of the Autostrada del Sole, Italy’s north-south highway. We were headed for a countryside convent — Convento Santa Maria del Giglio near Bolsena — where “our” grapes awaited. Soon, that same sun was poised brightly and securely in the blue cradle of an autumnal sky.

Once there, we met a couple who had traveled to the harvest from cloudy northern Europe. They were already in shorts. Chatting wasn’t in the cards. We briefly greeted the others and got to work.

Buckets, shears, and comfortable old clothes are all that’s needed to transform your day into the subject of verb, vendemmiare, to harvest grapes. You snap the grape cluster from the vine, toss it in the bucket, and repeat. With so many helping hands, the buckets filled up at alarming speed, their contents carted into the cantina where the rest of the winemaking went ahead.

This is as good a spot as any to draw a picture of the convent. The Giglio convent (a full-fledged Franciscan monastery until the late 1990s) is a short walk away from the hamlet of Bolsena on eastern shore of Lazio’s Lake Bolsena. It sits on a hill with a view of the volcanic lake, which is named after the town (or is the town named after the lake?). No one knows for sure. If it sounds idyllic, it is.

The town itself is steeped in religious history. It houses a period-piece shroud portraying the 13th-century Miracle of Bolsena, in which a priest, who had doubted the bread-and-wine doctrine of transubstantiation, allegedly saw blood emerge from the host, or sacramental bread, and bleed onto the corporal, the white cloth under the chalice.

Like all good convents, this one has four hefty stone walls that once served to remove the religious — Franciscan friars, not nuns — along with their grape vines, fruit and olive trees, from the day-to-day world. The convent now houses a communal association that still has ties to the Franciscan Order. There’s a chiostro (cloister) for daily prayers, a church, an elegant bishop’s room, many smaller ascetics’ rooms, and a refectory where the friars once ate on concrete tables facing each other at a distance.

The cantina is out back. It’s been used to make and store wine since the 17th-century convent grape vines first began producing, not long after its construction.

In their time, the friars had their own way of pulverizing the grapes, climbing in shifts into a large concrete tub in the corner of the cantina to stomp, something I was secretly hoping to do.

But it wasn’t to be. Instead we hand-broke the grapes from their stems and dropped them into a mechanical grape crusher and turned the handle. The damp cave of a cantina soon filled with the familiar sweet and sticky perfume of smashed grapes, a smell so packed into the walls I wondered if they could still absorb it.

The crushed grapes were then dumped into an old press that our harvest leader used to separate the juice of the grapes from the peels, sticks, and seeds. Out came a brownish liquid — hard to imagine ever becoming wine — that was bottled and stored.

Based on the white grapes on the vines, the friars preferred white wine to red (white grapes can also produce red wine, but it’s usually made from blacker ones).

At midday we broke for lunch and chatting with fellow grape harvesters, after which it was impossible not to fall asleep in one of the hammocks between the trees. Early October weather is delicious in central Italy, rich in balmy sunshine.

But the thought of a task to finish got me, and everyone else, back up and into the fields. With so many grape harvesters, the vendemmia was done with by the end of the day.

That night we drank the fruits of last year’s labors, a bright and almost fizzy wine, both red and white, one that tends to linger in the mouth a little too long after it’s finished. It certainly can’t be called the best, but it’s adequate for dinner — a lucky thing since I now have three liters of it.

Now that I know what vendemmia is, I can let one of the harvest’s many sayings do the rest. “Who hoes, hoes his vineyard; and who hoes it well, gets a better vedemmia…” — which is to say a job well done sooner or later yields prosperous results.