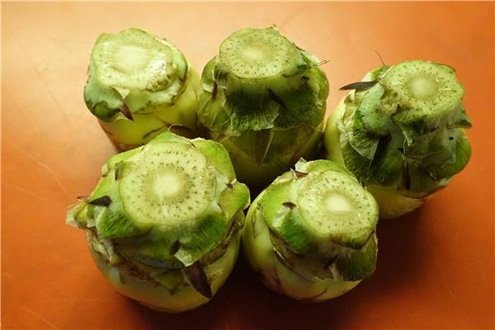 Get your Japanese artichokes ready to go.
W

hen you have an onslaught of vegetarians in the house of a major carnivore, something has to give. No wonder my favorite summer words have been flexible and adaptable. Put a cook in a corner about what to serve and she bounces off the ropes and comes out swingin’. At least this one does.

My step-kids helped. By deciding to limit their gastronomic salivations to foods without nervous systems, I had to do the same. In fact, I already had been, at least lately — minus my annual steak (along with a martini) at Perry’s in Austin, Texas. Even then, the portion was small — of meat, not martini.

A vegetarian challenge is a turn-on. I get excited about all the great things I can put together by scratching the animal and concentrating on vegetable and mineral.

After a thorough romp through my recipes (and even my mother’s flash-card box that contains oh, so many Texas meat dishes), I came up with a list to tickle the tongues of almost anyone, carnivore or otherwise.

I began by assembling various pasta sauces — artichokes with lemons from our tree; mint, zucchine (from the Little Shop of Horrors plant that rules our garden) with sweet onions; pesto (naturally!) from our sweet Genovese basil and made with grilled pistacchi instead of pine nuts. I added a mind-blowing eggplant aperitivo that a Los Angeles kitchen king and restaurant(s) owner taught me years ago.

That ought to do it, I told myself, until myself replied, “Yes, but there are nine of us each night,” and so I told myself again, “Hey, piece of cake.”

First, let me pass along the eggplant aperitivo, which will disappear in minutes even if you have nine people hovering around your stove. Make that nine seconds.

I thought I’d made enough for the crowd, but hey, I’m used to cooking for two. So if you think four eggplants will suffice for six, add two more.

Choose small, Japanese eggplants to get bite-sized slices or at least ones you can easily cut in half to stretch the recipe for a crowd.

Have a few branches of rosemary ready, stripped and chopped very fine (not finely, okay?) Have ready a small jar of clear liquid honey.

Cut thin slices and put all of them in milk overnight. Yes, milk. When you’re ready to sauté, take them out of the milk and shake them in a bag with a cup of flour, a teaspoon of sweet paprika, and a little salt and pepper.

Heat a large shallow skillet and add about 1/4 cup of olive oil. Heat to smoking and add the slices in one layer, cook for a few minutes and then turn to crisp on the other side. Put the slices on a warmed plate and drip a thin stream of honey over them, then sprinkle the chopped rosemary over all and a bit of coarse sea salt.

Since the eggplant will disappear before you’ve had the chance to boil the pasta water, start boiling first.

Now then, on to my pesto, which is really quite simple. Years ago, I started using a handful of pistachio in place of pine nuts, which I toast with a little olive oil in a pan. I add several garlic cloves, also toasted to soften their raw taste (an optional choice). I adore raw garlic but I find the pesto lasts longer and maintains its lovely green color when the garlic is sautéed just a few minutes (but not cooked through).

In the bowl of a food processor, put the leaves from a very large bunch of sweet basil, along with the toasted nuts and garlic. On low heat, begin adding extra virgin olive oil in a stream until the pesto reaches the consistency of a thick batter. At this point, pour the juice of half a lemon, which adds a little acid for balance, and also helps with the color.

Okay, by now your nine have finished off the eggplant, the pasta’s ready, and the pesto is waiting. Simple, right?

It wasn’t that night. In overcompensating for the hordes, I put in just a teeny bit too much spaghetti — even with three teenagers at table.

Now we’ll be eating pasta for at least a week, so who needs to cook. As I said, piece of cake. And there’s no meat in that for sure.