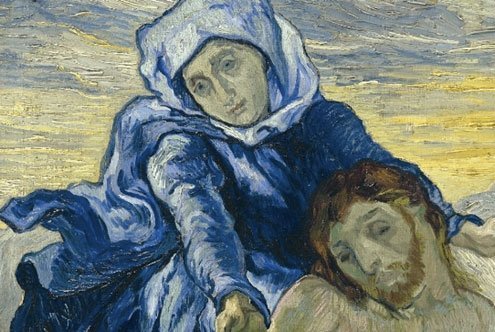 he woman gushed to her husband, “Look, a Dalí! I had no idea this was here.”

“Great,” came the wry reply. “But my feet are killing me. Can we move it to the darn chapel already?”

So it often goes among visitors who unwittingly stumble on the Vatican Museum’s Collection of Contemporary Religious Art (Collezione Arte Religiosa Moderna). The 55 rooms brimming with paintings, sculptures, graphic art, and drawings by more than 250 international artists come at the tail end of an arduous, one-way route to Michelangelo’s pièce de résistance, the Sistine Chapel ceiling.

After being herding for hours with unruly crowds through an overwhelming labyrinth of galleries stuffed with antiquities, tapestries and frescoes, overwrought Vatican museum-goers often beeline right past a collection that boasts works by Van Gogh, Rodin, Chagall and Matisse.

Inaugurated by Pope Paul VI in 1973, the contemporary collection was Paul’s attempt to “re-establish the friendship between Rome Church and artists” that peaked during the Renaissance and Baroque. It was then that the ambitious Julius II and Urban VIII commissioned the likes of Michelangelo, Raphael and Bernini to capture the ethos and aesthetics of Catholicism through their art of the sublime.

However, papal patronage of the arts began to waiver after Italian unification in 1860 dramatically scaled back the Vatican’s power and possessions. It suffered further when 19th and 20th century Impressionist, abstract and non-secular art eclipsed faith-based art in popularity.

When Paul ascended the papacy in 1963 during the Second Vatican Council, he immediately acknowledged the integral role of artists, which Vatican II recognized as vital to the reinvigorating the Church in the modern world. In May 1964 Paul held his famous “Mass of Artists” in the Sistine Chapel in which he encouraged a select group of contemporary artists to donate spiritual works of art to the Vatican.

“You are masters,” he proclaimed during his homily. “And if we were deprived of your assistance, our ministry would become faltering and uncertain and a special effort would be needed, one might say, to make it artistic, even prophetic.”

Nine years later donations from artists, collectors, and private and public benefactors were put on display at in Vatican rooms once occupied by Innocent III, Sixtus V and the disgraced Alexander VI.

Though Alexander, Rodrigo Borgia, is better known for his nepotism, simony, and allegations of incest with his favorite daughter Lucrezia, he did commission Pinturicchio (“little painter” or “dauber”) to fresco his private apartments in the Vatican Palaces.

Beginning in 1492, Pinturicchio and his assistants decorated the ceilings and lunettes with scenes from the lives of the Borgias and depictions of biblical accounts ranging from the Annunciation to the Resurrection, accenting the whole sumptuous show with opulent gold leafing and stucco work.

Pope John Paul II called the Borgia Apartments a space where “historical splendor is combined with the fascination of art.” These frescoed rooms host a small bronze of August Rodin’s “The Thinker” and treasures by 20th century Italian artists including Mario Sironi, Umberto Boccioni and Angelo Biancini. A room adjacent to the Borgia Apartments is dedicated to late 19th and early 20th century French artists. A pocket-sized Pietà by Van Gogh, Gauguin’s polychrome sculpture “Blessed are the Pure at Heart,” and the haunting pastel “St. Joan of Arc” by French Symbolist Odilon Redon are on display.

Most of the collection is housed in a series of spacious, renovated former papal chambers that open onto each other and run beneath the Sistine Chapel. The artwork is divvied up according to the artists’ country of origin. Though lacking in major masterpieces, the collection’s impressive range of international artists and the variety of styles make it browse-worthy.

Then there’s Matisse, the French master who the Vatican is relying on to bolster attendance to the collection. Before year’s end the Vatican is expected to open a room housing three large-scale preparatory sketches the French artist drew before decorating the Chapel of the Rosary in Vence on the Cote d’Azur. Each is more than five meters high and drawn to scale. Matisse-designed chasubles, silk clerical vestments, and a bronze cross by the artist will also go on display.

On the agenda for 2011 is a first-ever Vatican pavilion the Venice Biennale, the esteemed contemporary art exhibition that the Vatican newspaper L’Osservatore Romano once denounced as an “artistic debacle.” A leap of faith indeed.