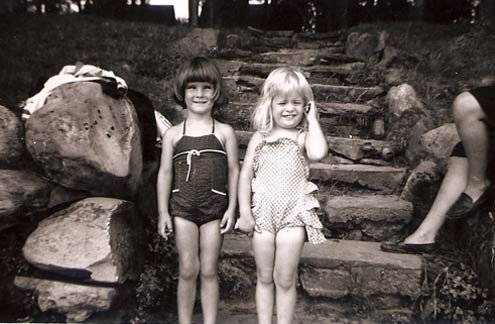 few weeks ago I took a morning walk with my dog around the lake in New Hampshire where I have a house.

I heard the water lapping against rocks on the lake’s shore. Warm pines scented the air. I was suddenly transported back to Wisconsin’s North Woods of decades ago where I saw myself in my bed at the resort Boathouse — known as the Lodge — where my family went every August.

Ahead of me lay a day that began with a pre-breakfast swim with my father, followed by pancakes, and the Lodge’s own maple syrup. Later, I’d play in the woods and feed my dolls berries from fern plates and twig cutlery. There might be a picnic at a neighboring lake reached via a narrow channel that twisted among beds of water lilies and charred stumps left by long-ago forest fires and logging.

On such an August day, fathers fished or puttered in boats. Mothers played tennis on the misshapen blacktop court surrounded by hollyhocks. In the afternoon on the dock came the scent of Coppertone mixed in with cries of “They’re up!” whenever someone mastered the art of water-skiing. While adults smoked, chatted and read the summer’s hot book — “The Godfather,” “Airport” or “Watership Down” — we children cannon-balled off the raft’s high dive, overturned canoes or saucered behind an Alumacraft with a 25-horsepower motor.

Sunday morning brought church in the tiny chapel attached to the cabin built by an Episcopalian bishop. In our Sunday clothes, we walked single-file along a woodland path, the lake glittering through the trees. The chapel was complete with a real altar and embroidered kneelers. Ya-ya, who was 90, raced the priest through the “Book of Common Prayer.” In her Kentucky drawl, she was always ahead by a phrase. We sang hymns (“For the beauty of the earth/For the beauty of the skies…”)

Sunday afternoon saw softball played on a field where home plate was a bronze plaque in memory of the bishop’s son killed in World War I. The umpire was Ya-ya’s son (with his pipe and Princeton pork-pie hat). The scorekeeper was my mother in her madras Bermudas and Abercrombie & Fitch (the original one) penny loafers. For adults, the game was an endless joke. For avid boys, who played to win, it was a cruel travesty. Cute children were allowed five strikes! Teenaged girls, who giggled instead of hitting, walked!

Every year my mother and her friends Alice and Elizabeth holed up in the Boathouse creating clever clues for a treasure hunt. There was always a costume party, ruled by bad puns. (Wearing a kilt made by my mother, with tin cans tied to his waist, my father was a “canny Scot”). An old tennis shoe painted gold and nailed to a two-by-four was the trophy for the annual “Rilly Big Shoe” tennis tournament.

The same families came to the Lodge and the surrounding cabins every year. Most, like Ya-ya’s husband, began the tradition in the 1920s, when it was a hunting and fishing camp. Every family had its table. Ours was in a corner under a deer head. Mrs. Mead’s was under a case with a snowy owl. With her white hair, she and the owl appeared to share a taxidermist.

The simple and good food harked back to camp days: sauerbraten or deep-dish rhubarb pie from the garden. The cabins and lodge were built of unfinished logs and had exposed wiring. Cast-off lamps and beds from the Pullman railroad car company, where one family’s grandfather had worked, furnished them.

It was the 1960s. We sang “Kumbaya” and “Blowin’ in the Wind” at hoot-nanny sing-alongs. I was only 10 in 1970, but even I could feel the times “a changing” against the static background of our annual rites. Suddenly cloth tablecloths and the laundress vanished. Then it was no more hats for church. Soon my father was the only one at dinner who wore a jacket.

I heard adults snicker about “the Pill.” I confused Selma — site of Alabama civil rights riots — with Thelma, who owned a store at home. Was the Vatican II an ocean liner? And what did it have to do with our friends the Fitzpatricks and Catholic Mass in English? At her 50th birthday party, friends teased Mom’s friend Alice: “Does she or doesn’t she?” (Miss Clairol’s hot slogan). Did turning 50 make Alice eligible for this new thing called Medicare?

But then it all changed. Alice died of breast cancer, Elizabeth of alcoholism. Everything felt less safe. The older cousin of one family, who always had a boat that was “too fast,” was rumored to have something to do with drugs. The Lodge was sold. The huge wooded lot across the lake was subdivided. Chicago hedge-fund types built elaborate houses. Two adorable freckled boys grew up into addicts. The rumor about their cousin was true. My father had a stroke. Our last year was 1979.

A few years ago I took my children to visit the Lodge. Home plate was covered with grass. The hollyhocks by the tennis court were gone. The Boathouse had been sold. My teenage son was brutal. “Mom, it’s all gone. Please, let’s just leave.”

True. But the sensations still cascade from time to time: the smell of lake, seaweed slithering around a shin, moss on bare feet, hamburgers on buttered rye toast, cool night air on a sunburn.

When I got home the radio was discussing Paul Ryan’s plans for Medicare, which had come up at Alice’s birthday party all those years ago. And I wondered: Will the thing called Medicare, like the tennis court hollyhocks, soon form part of someone’s memories?