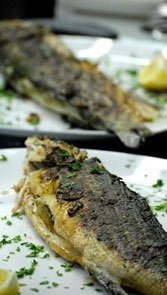 Seconds are all about fish...
T

he neighborhood around the Vatican, with its narrow streets and tourist clutter, finds itself something of a food orphan. Few top-flight restaurants exist in the so-called borghi, once dark, teeming backstreets swelled with the city’s poorer classes. Until Mussolini literally bore a hole from the Tiber to St. Peter’s (Via della Conciliazione), opening the neighborhood to visitors, it was something of working class enclave situated by chance near the largest church in Christendom.

That doesn’t mean you can’t find a good meal. One the contrary, straightforward small restaurants abound. It’s just that their Rome menus, rich, uncomplicated, unpretentious, don’t get much press.

Ristochicco should. It’s without doubt the best price-value restaurant in Vatican neighborhood. Owner Roberto Vaccini (who founded the place in 2006) thrives on producing simple, traditional Roman dishes. Both Roberto and his wife Roberta are friendly folk. The strength is pasta. Try the seafood pasta (spaghetti agli scampi, with shrimp; or linguine allo scoglio, with selected shellfish). If you have a hearty appetite, split a pasta portion in two. It’s allowed. The gricia</I (pecorino and bacon) and norcina (sausage and cream) are also great.

If you’re still hungry afterwards, go for the fish. Lovers of Roman food can pick up a pajata, intestines usually with rigatoni.

Kids welcome, with pizza served also at lunch, a rarity in Rome, where most restaurants serve it only at dinner. Our only complaint is that Ristochicco is small, and can fill up quickly, even with the outdoor seating.

About the Author: Greg Burke

Greg Burke is the Rome correspondent for Fox News. He previously covered Italy for Time Magazine. With Christopher P. Winner, he helped found the biweekly Rome-based magazine Metropolitan in 1992. He considers himself somewhat of an expert on Italian football, and is the author of "Parma: Notes from a Year in Serie A." He studied comparative literature at Columbia University, but his goal in life is to become the head coach at Napoli.