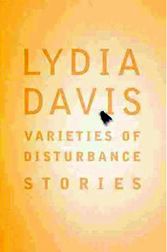 In “Idea for a Short Documentary Film,” a one-line treatment, Davis is in a whimsical mood: “Representatives of different food product manufacturers try to open their own packaging.” The 57 stories in this volume consecrate her endlessly ambidextrous talent: she can be either consummate minimalist or full-blown storyteller. Kafka in “Kafka Cooks Dinner” decides between potato or beet salad for Milena without resolving the dilemma (“…we really weren’t lovers at that moment, just grammarians.”)

Davis objects to the obvious. “Grammar Questions” gets to death obliquely, but therein the influence: “In the phrase ‘He is dying,’ the words ‘he is’ with the present participle suggest that he is actively doing something. But he is not actively dying. The only thing he is actively doing is breathing.”

The probing of grammar and rules — the conventional stipulations of order — is a recurring theme. So are “case studies” — of the very young “(We Miss You: A Study of Get-Well Letters from a Class of Fourth-Graders”), the very old (“The Way to Perfection”), and hired help (“Mrs. D and her Maids”). Davis devotes Proustian attention to the minutiae of the mundane, but with a corkscrew: “She could not drive if there were too many clouds in the sky.” Her writing sways among the decades (the 1940s and 50s are featured), with Davis as a tractor beam casting gentle, often funny (never sardonic) light on the human condition. “I feel as though I were knocking up against myself at every turn,” a translator writes in “Cape Cod Diary, “I am sometimes almost in a panic. That may be because I am also sometimes knocking up against the limits of what I can do with this work.”

Everything about Davis is in the sometimes, the almost, the limits, the panic; and it’s almost invariably good.