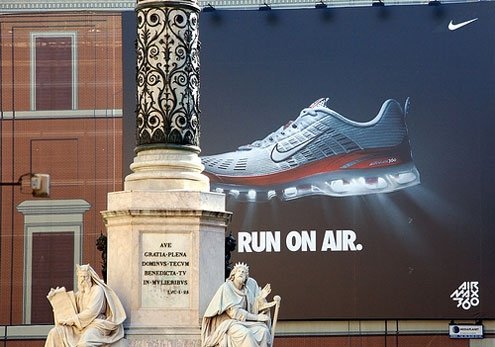 Palazzos and their sidekicks.
O

n and off in recent years the under-renovation façades of a number of historic buildings in central Rome have morphed into giant product placement caricatures. Fabric billboards with brightly-painted windows share space with handbag-toting models. Imagine a Christo-wrapped Coliseum sponsored by Prada and decorated by Richard Estes.

Some of the max-posters can make you forget what they’re covering. Take Palazzo Venezia, under wraps since early 2009. Meanwhile, income from the billboards — maxi space can run more than €100,000 a month — fills city hall and ad agency coffers.

Since tens of millions of residents and visitors troupe annually through the streets of the center, available façades are precious.

But adolescent-driven repackaging produces fallout. While pinning color to the venerable plays to short attention spans, history foots the bill. Symbols of the past, some of them staid, are made to seem what they’re not, namely malleable — as if history had a reset command.

“So what,” reply Rome city officials, who defend the maxi-posters as tasteful, hyper-realistic creations that liberate the public from the brunt of men at work.

Enter a second, less direct subversion. “Seen” work, industry at its most literal, gives the repair process both context and meaning. Work in progress is incentive. Toil isn’t a coloring book.

The Rome character complicates matters further. The Italian capital has no framework for the temporary. The temporary is permanent until proven otherwise. So what counts more, satisfying the needs of swift renovation or those of dallying, audience-hungry advertisers who crave “widescreen” placement?

Most of the faux-façades are concentrated in Rome’s center, the core of all things old (and touristy). Passersby generally see the canyon-sized canvases as just another crafty if commonplace piece of promotional encroachment. They’re a polite telemarketer’s call — if such a thing exists. Or pretty spam. Aesthetic requisites are meshed ingeniously with market place demands.

Italian-style objection to the trend is limited to cynicism. Poster façades don’t threaten family livelihoods. When big money stirs, Italians tend to fall back on their anti-civic, peasant origins, resigned to the designs of the powerful.

While St. Peter’s has so far eluded maxi-wrapping, a number of churches haven’t, with parishes using profits to help pay off restoration costs. Frontal repairs to Vatican-owned properties and churches have already yielded maxi-posters, most promoting exhibits. Several other Italian cities, including Venice, have also embraced the trend.

Interestingly, when the time comes to remove the maxi-placards, a kind of Stockholm Syndrome can kick in. Completed work can suddenly seem more banal than its colorful surrogates.

In pre-Millennium Rome façade repair was as predictable as trattoria pasta. Up went skeletal scaffolding and green netting, behind which little men in coned, newspaper hats hammered, drilled, groused and whistled.

But the coned men were living, breathing souls, actors in a rebuilding passion play. Now the actors are concealed. So are the buildings. In the meantime, commercial predators decamp, pull up a chair and stay a while. Some say they collude with builders to slow completion.

Since Rome builders have long sworn by a contractual caveat that tolerates slow-downs in the event of varie ed imprevisti — “various and unexpected” — corruption is hard to rule out. Rome building delays have long run into the years, if not the decades. Add a civil suit or an archeological find and a whole piazza can vanish, as Piazza Barberini did in the 1980s, trapped between the contested refurbishing of Bernini’s Neptune statue and endless work on a local Metro stop. The rusty, corrugated barriers around the fountain gradually took on their own poster-covered life.

My favorite construction site is located at the mouth of the city’s Via Salaria, its backside facing over Via Pinciana parallel to the Villa Borghese near the Borghese Museum. There, a modern, glass and steel structure has been part-entwined in scaffolding since 1990. Workers vanished more than a decade ago. It’s a now block-long venue for campaign party posters promoting national politicians whose faces have changed as little as the site.

That the unfinished buildings house the headquarters of the nation’s architects’ and engineers’ pension guild seems ironic. If only irony meant something. It doesn’t. Not here.

Remember that Rome is just north of Africa and just east of Greece, the site seems to murmur. And remember also that in Rome both time and rule of law are approximate and relative only to themselves. Opportunism and stasis coexist. There is no irony. There are no civics. There is only the various and the unexpected.