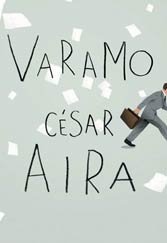 Meet Mr. Varamo, a third class “pen pusher” in the city of Colon, Panama. Those who know Aira know they’re in wonderland as soon as Varamo, a single, 50ish man, picks up his pay, which turns out to be in counterfeit pesos. It is then that Aira trots out such phrases as “random arbitrariness” and the idea of being “threatened from within by the infinite,” all of it in the ferociously screwball service of letting us know that Varamo, whose mother is a Chinese betting addict, somehow, as an “accidental writer,” came write that “The Song of the Virgin Child, a “celebrated masterpiece of Central American poetry.”

So what do we have (aside from Billy Wilder on LSD): An unreliable narrator with a thin grasp of reality telling us about a confused clerk with and equally thin grasp of the “visible and the real.” The result is “baroque lubrication” of the third kind. With straight-faced hilarity, we learn that Varamo likes embalming small animals, including a resourceful fish he’s put in his sink in hopes of stuffing it so that it looks like it’s playing the piano, that is until his mother comes by a cooks it, after which it comes back to life “twisted, bloated and monstrous.” There’s also a black chauffeur named Cigarro who drives ministers in “regularity rallies” and the Creole Góngoras sisters who illegally import golf clubs worried that a “putter” in Spanish sounds too much like a whore. Oh, and Varamo is also guided by Voices.

This is a pyrotechnic send-up of the avant-guard, as well as spoof of both magic and realism, with the loony narrator in on the joke. He says: “In improvisation one has to keep jumping from reason to unreason.” And: “Invention can assume the form of a documentary record of reality…” It’s an “experiment in literary criticism” focused on man, Varamo, who really wanted to write a book called “How to Embalm Small Animals,” but was instead interrupted by brain waves of the Virgin.

It’s a “day in the life of an accidental writer” served the Aira’s inimitably mutant vigor.