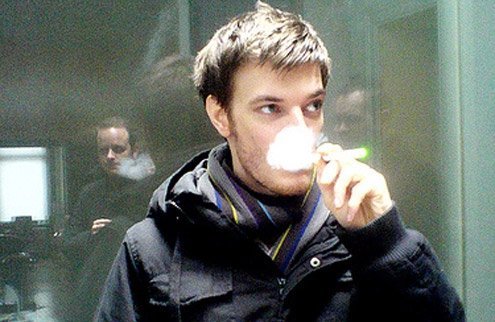 E-cigarettes: A booming "tobbaco" industry based on illusions.
E

uropeans love their cigarettes. Not that Americans don’t smoke, they do. But American smokers have also been up against an array of laws and social taboos for decades. Europe as imagined by Americans is less restrictive. It’s seen as a continent of good food, better wine, and endless indulgences – which often enough include cigarettes.

While the European Union has sponsored wide-ranging anti-smoking legislation (Italy banned cigarettes inside bars and restaurants a decade ago), Rome streets are still saturated with the aroma of a freshly lit matches and smoldering tobacco, particularly outside anyplace that sells coffee or food, music or fun. Seeing smoky rings escape into the air from the tip of a burning point may be a horrific sight to most Americans, but to me it remains something magical, romantic, if not slightly exotic.

That may be because I’m among the guilty ones. I love the feeling lighting up after a Sunday cappuccino at my local café. Or while walking by the Tiber. Most packs cost €5 (about $6.50), a bargain price for a visiting New Yorker.

Everything about cigarettes seemed timeless.

But on my last trip to Rome, strolling down to my local vending machine, I found a new business that stopped me dead in my tracks. It sold electronic cigarettes.

The electronic cigarette, also known as a personal vaporizer, is a battery-powered cylinder that boils liquid nicotine or a nicotine-free solution to create a vapor which mimics tobacco smoke. While some e-cigs resemble actual cigarettes, others look like fancy business pens.

The device has a long history. In 1965, American Herman Gilbert applied for a patent for a “smokeless, non-tobacco cigarette.” He imagined a “hollow shank” that would carry “flavored air.” The idea went nowhere, probably because the Surgeon General’s famous smoking report on the perils of nicotine, issued a year before Gilbert applied for his patent, hadn’t hit home yet.

Nearly 50 years later, a Chinese pharmacist and chain-smoker named Hon Link updated Gilbert’s work, eventually putting his version of the device on the Chinese domestic market in 2004 as a way to quit smoking. Hon called it a “much cleaner, safer way to inhale nicotine.” Though it hardly made a dent in smoker-heaven China, the idea gained a foothold.

As for me, the e-cig idea froze me in my tracks. My naïve and jaded New Yorker side blinked hard, refusing to accept that romantic, hardcore Europe, the Europe of smoky dreams, would stand for such a thing. It had to be a freak, an accident, a strange but passing novelty.

It was none of those things. E-Cigs are now everywhere. In Rome, they’re sold in the city center and beyond. They’re smoked by young and old, handsome and beautiful, trendy and plain. Though health experts have their doubts about liquid nicotine (some say it may cause depression), e-cigs are legal in Germany, Ireland, Holland and Portugal (you have to be 16 in Italy, where they’re banned in schools). In the UK, they’re not even covered by smoking bans. The EU insists it wants to regulate them, but the revenue boom —in a time of crisis — has given it second thoughts.

E-cigs were so successful in Italy that the cash-starved government toyed with taxing them (e-cig start-up “kits” now run roughly between €30 and €80). It dropped the idea after a wave of protests from Italy’s newly formed National Association of Electronic smoking, which lobbies for the more than 2,000 nationwide e-cigarette shops. In June, thousands of storeowners took to the streets of Rome with signs that read, “We don’t smoke” and “Smoking Kills. So does the tax.” Not bad for a new industry.

Still, I remained skeptical. My social and emotional experience of Italy was so tied to the role of tobacco cigarettes that the thought of smoking an electric one undid my idea of foreignness. E-cigs on a city bus. Really?

What shocked me even more was taking a closer look at smoking habits back at home. Even New Yorkers, I soon found out, had moved into an e-cig phase — so much so that state government had intervened. In September 2012, it barred e-cigarette smoking within 100-feet of school entrances. (It later banned all sales to minors.)

I should have known. New Yorkers are constantly revising their lifestyles to strike a balance between health and self-indulgence. People crave tamer and less toxic variations on 20th-century guilty pleasures. Smoking is no exception. E-cigs sounded a little like nicotine-free gum, so people took to them.

Earlier this month, the European Parliament voted down a proposal that would have put e-cigarettes under a medicinal, quit-smoking label, something that would have made them far more expensive. The EU is reluctant to hinder any industry that shows growth signs.

Until 20 years ago, a pack of domestic Italian cigarettes cost about the same as an espresso. At the time, the idea of electronic cigarettes might have seemed like something comical, or out of science fiction, just like the idea of the web.

But that was then. Now, even when it comes to tobacco cigarettes, the word “eternal” might soon find itself in jeopardy.

About the Author: Sophia Heydebrand