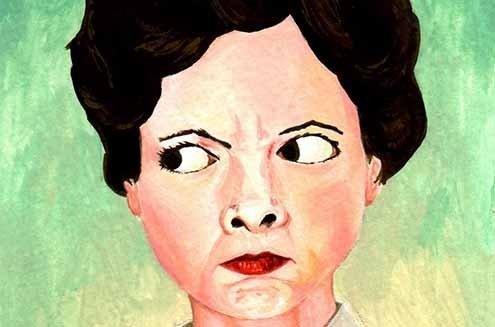 Too often, stories of stormy relationships between parents and children don't include the perspective of children, and how they respond to anger and neglect.
I

was teaching a postgraduate seminar for psychotherapy students. These are smart and sensitive students. I gave them a case study to read from an article on obsessive disorders by Bernard Brandchaft from his collected works, “Towards an Emancipatory Psychoanalysis.” (How can you not like a book with that title?)

The case was that of a young man who suffered from many paralyzing obsessive and compulsive symptoms. His father worked in a menial job and his mother, who had to work, berated him constantly for his lack of ambition and success. They lived in a slum. The mother was sadistically abusive to the patient, both verbally and physically. His attempts to obtain the care he needed were always met with derision. The patient’s older brother was his mother’s favorite as well as his afternoon babysitter. He’d torment his younger brother psychologically and physically, beating him often. If he complained, his mother told him it was his own fault: he had asked for it. The mother accused him constantly in a threatening and ominous way (“I know what you’re up to.”) Little wonder he was plagued by obsessive indecision, never knowing what it was he did wrong, always questioning his actions while fearing another beating.

In contrast, the young man’s athletic talents were a source of solace and rare pride for his downtrodden father. Consequently the young man had to continually outdo himself in sports, from which he got little enjoyment. But if he didn’t excel, his father would have nothing to lift his spirits and to survive he needed at least his father to be vital and present.

It struck me that no one seemed to pay attention to her sadistic abuse.

This elicited good discussion of an important topic, not only for future psychotherapists but also for anyone who works with kids (or young adults). Why is it adults favor the viewpoint of the grownup and not see that of the kid

An acquaintance once approached me and asked me if I could help some friends of hers, a couple with a “problem adolescent.” “They’re really nice people” she said, “but their son is real trouble.” They only wanted a consultation.

When we met, they told me about their son, his rudeness, explosive rage, his troublemaking. They were at their wits’ end. The anger they described prompted a question. “Did the boy experience any separations or losses in his life, a death, a person going away…?”

With a “how did you know that?” look, they admitted that the husband wasn’t the boy’s father. There had been an unpleasant separation and the father had returned to Canada. The boy was left with his disgruntled mother while missing his father terribly. “After a couple of years,” said his mother, “I couldn’t take his rages with me, saying how much better his dad was, so I said, okay, if he’s so great, go live with him!”

But by that time his father had married a woman with her own children, and the boy was not really welcome. With his anger increasing, his mother, by then remarried, decided she had no choice but to send him to boarding school though he begged her not to.

He was now unwanted by the adults in his life. He had endured two traumatic separations. His father was in Canada, his mother hostile, neither parent in the mood to acknowledge him, let alone want him. Wouldn’t you be angry I asked?

How, I wondered, could my acquaintance not see why the boy was so angry?

How could my students not remember the mother’s abuse, which was the crucial part of the case study?

It’s not so different from the story of Oedipus as it’s usually remembered. Freud retold and immortalized the ancient Greek tale by putting his focus on a man who kills his father and marries his mother. That telling omits what to me is the most striking and ghastly part of the story: A mother piercing her newborn infant’s ankles with her brooch, running a strap through the wound while the baby’s father, holding him by the strap, hands him to a shepherd to expose on the mountain.

The point of view of the grownup seems to always prevail.