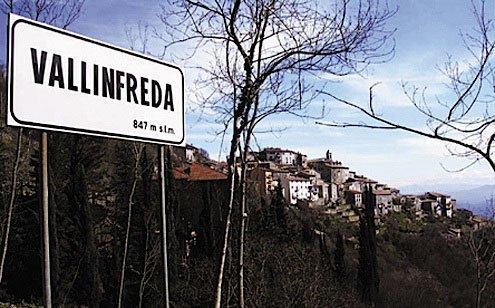 Vallinfreda is trying to reclaim its population.
V

allinfreda is the perfect example of picture-postcard Italy. It perches on a Lazio hilltop to the east of Rome, basking in the sunshine, with a snow-capped mountain-range as its backdrop and the local church bell tower climbing above the rooftops of the highest houses.

Inside the church of San Michele Arcangelo, Father Antonio Casanelli is ushering local residents and visitors on a guided tour of his elegant medieval structure. “The men and women used to come into the church using separate entrances,” he tells the group. “They also used to sit on different sides of the aisle, men to the right and women to the left. In fact some of the older people still follow that tradition.”

There are, however, only around a dozen regular churchgoers these days, he explains after the group has filed out.

Vallinfreda literally swells in the summer; its itinerant population rises to 3,000, as Italians seeking relief from summer heat flee to the cooling hills. But the rest of the year the population is about 300 inhabitants, fifty percent of whom are elderly. This makes it among the smallest comunes in the Province of Rome. In 1915, Vallinfreda had 1,500 permanent residents, but by the 1960s the figure was down by half.

Now, it’s a sleepy hamlet, and its situation is becoming commonplace throughout Italy. Casanelli’s tour of the church was part of a campaign known as “Piccola Grande Italia,” an effort by the Environmental League (Lega Ambiente, website: www.legambiente.com), a nonprofit watchdog organization, to draw attention to the country’s vast small-town heritage. Recently, some 1,400 communities threw open their doors during a nationwide festival intended to promote local produce and traditions. Suddenly, mayors and other dignitaries were tour guides for a day.

It was special day in Vallinfreda, where life is generally untrammeled by festivities. A decade ago, when the school population dropped to around 50, the education ministry closed the institution.

At San Michele Arcangelo, Father Casanelli, at 77, is long past retirement age. But after 18 years here he was only too pleased to stay on when the bishop asked him. He fears that when he does leaves Vallinfreda will no longer have a priest of its own, an irony in a place that between the 12th and 16th centuries was run by three families steeped in Vatican lore, the Orsini, the Colonna, and the Piccolomini.

“It’s difficult to find [priests] because there are few young ones,” says Casanelli, “It could be that they will merge the parish with two or three other small communities.”

The shortage of priests faced the Roman Catholic Church at large hits home in the villages, where priests play a major role in the tone of life. Even Italian state television has picked up on importance of this role, setting a hugely popular series, “Don Matteo,” in the Tuscan town of Lucca.

In the television program, the breaking of bread among friends is a key component of small town life.

In Vallinfreda, on the March Sunday “Piccola Grande Italia” was staged, people swarmed around a stall in the main square, in the delicious presence of cheeses, salami, wines and beans. Cakes and

biscuits abounded, along with local blackberry and milk tarts and aniseed ciambelle — which according to local tradition village brides should bake and distribute on their wedding day, a tradition that persists to this day.

A new law awaiting final Senate approval would apportion new funding to villages like Vallinfreda, assisting them in promoting local foods, improving computer access (Vallinfreda has its own website, www.vallinfreda.com), and offer financial incentives to encourage city-dwellers to relocate from congested urban centers. Meanwhile, the Environmental League is working to ensure people leave the city to discover their rural treasures.

“We often use ‘Chianti-shire’ in Tuscany as an example,” says Alessandra Bonfanti, a Piccola Grande Italia co-ordinator. “It’s an area whose beauty has been well and truly discovered, but in Italy there are Chianti-shires everywhere. It’s just that people don’t know about them, and this is a real loss. But maybe it’s something we can turn into an opportunity.”

Vallinfreda is like any village in this mythic “Chianti-shire,” but with a slightly different landscape. It has three shops, a post office, pharmacy, bar, restaurant and a police station; it has learned to cope without its school, making good use of the building, which now houses a nursery and the first-aid post. The town recently pushed to obtain its own ambulance. The pharmacy opened last July after a long campaign to obtain one.

Concetta Barrile, the pharmacist, moved here from Sicily. She has nothing but praise for the village and its people. “It’s very welcoming,” she said, “the people get involved in the life of the village and everybody knows each other, so it is very different from living in the city.”

Annamaria Aristotile, 61, has lived in Vallinfreda all her life. She has no regrets. On the contrary. “At night it’s quiet. You can relax. No one bothers you. You can even leave your keys in the door.”

Her friend Loretta Berardi, 60, was born here, moved to Rome as a child, but recently returned in retirement with her husband. “It’s better here. There’s clean air, we get out into the countryside, into the mountains, and so on. We’re very happy here.”

Mayor Piero Chirletti is hopeful about the town’s future. “A few more children are being born here … because some young people have decided to settle, given that it isn’t far from Rome, the air is good, the atmosphere is pleasant, there’s no pollution and the food and life here are pretty healthy.”

— 72 percent of Italy’s local communities have fewer than 5,000 inhabitants.

— 9 percent of Italy’s population resides in such communities.

— 99.5 percent of small communities have their own officially certified local products.